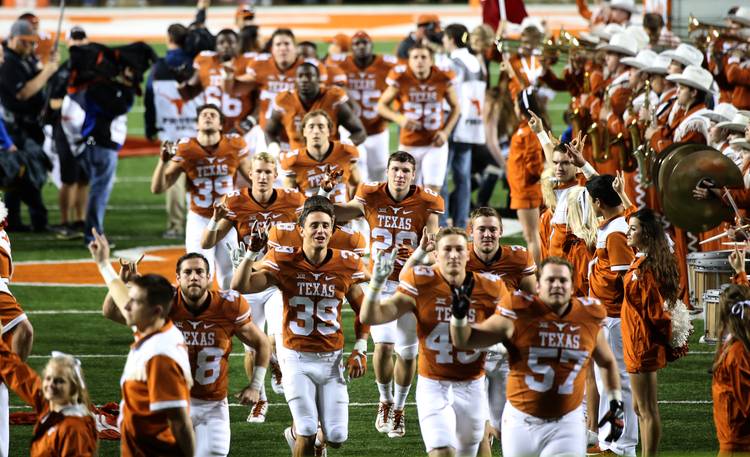 Texas announced Friday that it has moved its home game against TCU from Thanksgiving Day to the following day, Nov. 25.

Wow. Texas announces that the Thanksgiving game vs. TCU now on Friday, Nov. 25, instead of Thursday.

Texas-TCU has been moved at request of TV partners. Soooo, going up against the NFL on Turkey Day isn't the best idea after all, huh?

Reaction has been all over the board, from fans who want to stick with tradition to those who welcome the change (plus at least one A&M fan who just had to weigh in).

@statesman huge fan of this move, only makes the holiday last longer with more days to celebrate…#HOOK'em

@AutulloAAS @bevobeat Like that! Hated rushing Thanksgiving to drive in from out of town to watch a non-rival game!

@BDavisAAS this is awesome, man. Would prefer Saturday but I'll take Friday. Get to spend holiday w family n not have to give tix away

@TexasExes good. Maybe now I can go and not make grandma mad.

@BDavisAAS it’s not just the NFL. Having a bad team play an uninspired opponent would have no chance against a tractor pull

@bevobeat Losing A&M as a rivalry game hurt big time. It being a non-marquee game hurts too. Would be better off as OOC game

@statesman that sucks. What happened to tradition. Some us like it.

.@BDavisAAS It would do alright on ESPN but no one is watching FS1 on thanksgiving.

@BDavisAAS not the nfl, aTm plays lsu on Thanksgiving… check the ratings from the previous aTm Thanksgiving game. Whoop!!!

What do you think about Thursday vs. Friday? Let us know in the comments.