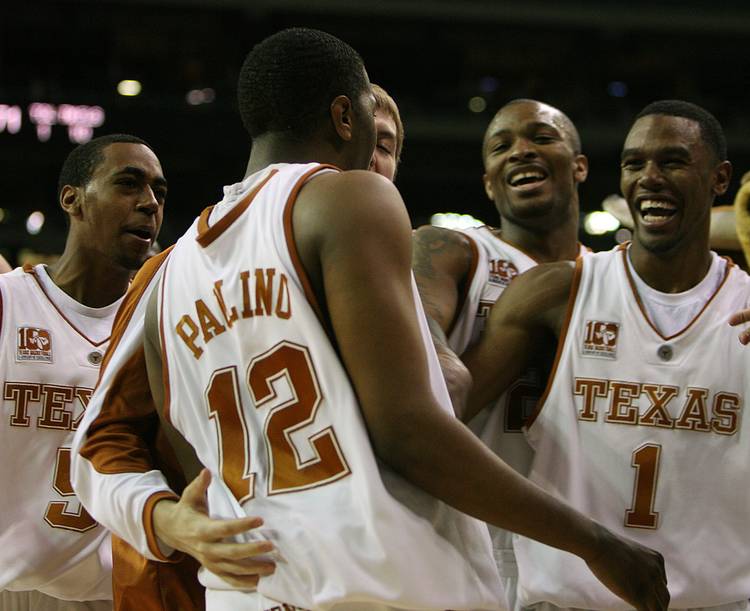 Kenton Paulino's teammates surround him after he shot a three-pointer to beat West Virginia during the Sweet Sixteen game of the NCAA tournament in Atlanta, Georgia, on Thursday March 23, 2006. Deborah Cannon/AMERICAN-STATESMAN 03/23/06

We took a look at five Big 12 Texas-West Virginia games from the past in preparation for Tuesday’s 6 p.m. matchup in the Erwin Center.

But the greatest game between the Mountaineers and Longhorns came in the NCAA Tournament in 2006.

West Virginia and the tournament darling from a year earlier, Kevin Pittsnogle, were back in the Sweet 16 and  facing Texas, led by LaMarcus Aldridge. The Longhorns were ranked No. 9 and was  one of the best teams in college basketball.

They met on Thursday, March 23, 2006 and played one of the more epic games of that year’s tournament.

Despite having three players who would go on to play long careers in the NBA (Aldridge,  P.J. Tucker and Daniel Gibson) it was Kenton Paulino who hit the game-winner.

Aldridge scored 26 points in the game, while Pittsnogle added 19 for West Virginia. Pittsnogle’s fifth 3-pointer with five seconds left set up the final play of the game, of which Paulino would tell the Associated Press “The whole thing was to get it down the floor and see what happens.”

Paulino graduated from Texas in 2008 and is now an assistant coach with Fresno State.