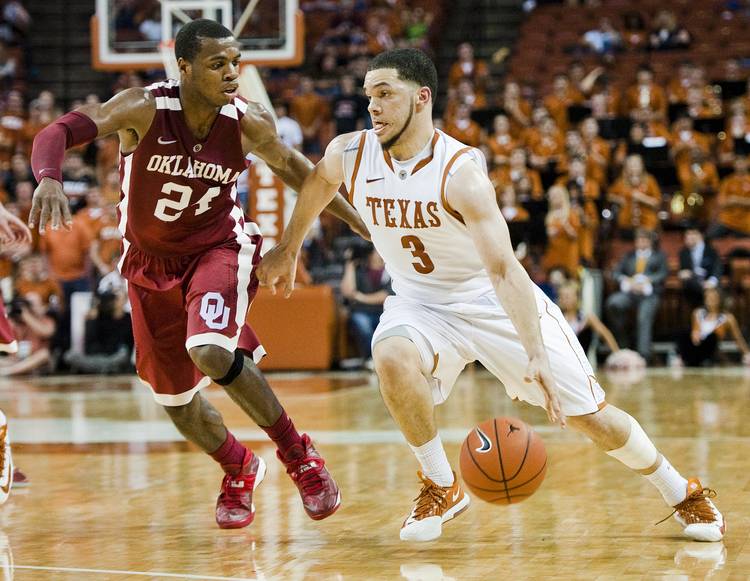 Texas and Oklahoma men’s basketball teams will play for the 89th time since 1910 on Saturday at 1 p.m. in the Erwin Center. The first time they played, Oklahoma won 59-26 106 years ago.

And the Sooners have controlled the matchup since, holding a 53-35 series lead.

Oklahoma won the first six meetings, but Texas was able to score a 31-28 win in 1938. Things changed when Rick Barnes took over about 60 years later and the century changed. Texas has beaten Oklahoma 19 times since 2003, including two separate six game winning streaks.

The Red River Rivalry in the Big 12 era, has featured three Oklahoma coaches (Kelvin Sampson, Jeff Capel and Lon Kruger) and three Texas coaches (Tom Penders, Rick Barnes and Shaka Smart). And Shaka Smart’s introduction to the rivalry earlier this month was one of the best games the two teams have played in Big 12 play and one of the better games of this Big 12 season.

But this will be Smart’s first home game against Oklahoma, and with that, here are five Texas-Oklahoma Big 12 games to remember.

Texas was looking to snap a five-game losing streak to Oklahoma, and Oklahoma was very good this season. The Sooners went to the Final Four, falling to Indiana in the national semifinals. Texas was climbing to national prominence under Rick Barnes. The Longhorns outscored Oklahoma 47-41 in the second half to force overtime, but Oklahoma’s All-American Hollis Price hit a jumper with 20 seconds left to win the game. The bigger story may have been Texas overcoming a 17-point deficit in regulation.

No. 6 Texas knocked off No. 5 Oklahoma to snap a eight-game losing streak to the Sooners. It was the first win over Oklahoma since 2000. The win came with superstar T.J. Ford scoring just eight points on 2-of-10 shooting, but his seven assists and 14 points from Brandon Mouton was enough to hold off the Sooners. Hollis Price scored 23 in the game. Texas led at halftime and had to hold off Oklahoma in the second half. The game may seem a little ho-hum (six-point win that Texas never really trailed in), but here’s how the Associated Press described it at the time:

“A crowd of 15,783 came to the Frank Erwin Center — easily the most raucous crowd in Texas coach Rick Barnes’ five years in Austin — eager to see Texas end the losing streak. When the final buzzer sounded, hundreds of students rushed the floor to mob the Texas players and sing “The Eyes of Texas” with the pep band.”

Brandon Mouton scored five points in the final 26.8 seconds as Texas overcame a 12-point deficit with little more than seven minutes left to win the game. Mouton scored 16 in the game as No. 11 Texas won the Friday night showdown in the Big 12 tournament. Texas had lost two games in a row entering the tournament, but this ended up being Texas’ fifth straight win over the Sooners, a streak that started in the above game. Oklahoma had also knocked Texas out of the Big 12 tournament in four times in six seasons.

Texas went on to beat Kansas the following day, but lost to Oklahoma State in the tournament championship game. Texas reached the Sweet 16 a few weeks later. Oklahoma was, in a rare occurrence under coach Kelvin Sampson, NIT bound.

Call it “Buddy’s Breakout?” The sophomore scored 22 and nailed four 3-pointers to pace the Sooners in this up-and-down game. Javan Felix, another sophomore, scored 28 points in the game (a career-high) and tied it at 78 with a pair of free throws following Isaiah Cousins’ ejection with 2:20 left in the game.

Texas got back in the game by using a 10-2 run to start the second half, but 13 3-pointers by Oklahoma was too much in this Big 12 opener. Texas went on to have a strong season that secured Rick Barnes’ future for at least a season. Texas went 24-11. Oklahoma, like Texas, reached the NCAA tournament. But the Sooners were upset in the first round by North Dakota State in overtime, 80-75.

One more to mention:

This was Rick Barnes’ first win over Oklahoma as the coach of Texas. This win snapped a four-game Oklahoma winning streak as Texas went on to win the Big 12 with a 13-3 record. Texas lost to Purdue in the first round this year, and Oklahoma, who would avenge this loss with a 64-63 win the next month in Austin, reached the Sweet 16.