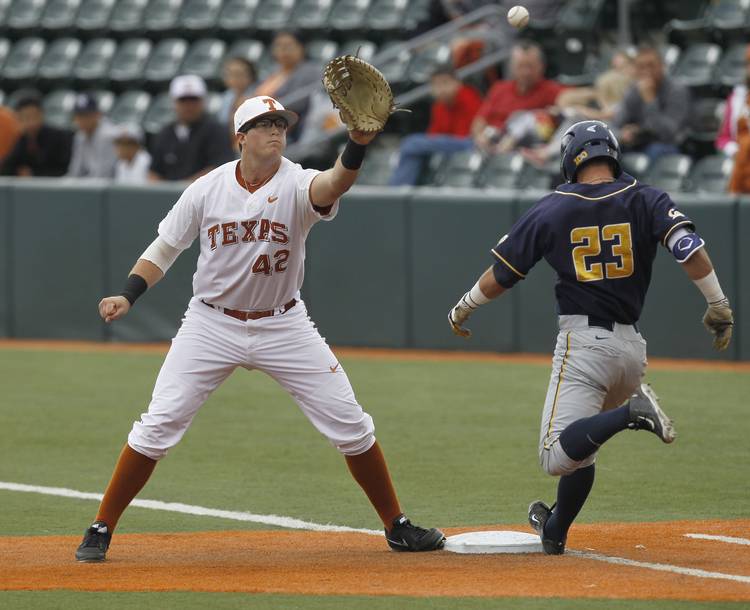 Where it went wrong: This was a full-blown meltdown. Leading 7-0 entering the eighth, Texas imploded, giving up two runs in the eighth and five more in the ninth to force extra innings. Cal tacked on three more runs in the 10th, winning 10-7, and giving Texas its first ever sweep in 79 four-game series. The relievers contributed most to the implosion, as Nick Kennedy (two), Chase Shugart (four), Jon Malmin and Travis Duke all gave up an earned run. Texas would have won in regulation, but first baseman Kacy Clemens couldn’t scoop a long-bouncer from short stop Bret Boswell in the ninth and Cal tied it, 7-7.

The starter: Connor Mayes was sharp, going six scoreless innings and striking out five. He had two runners on in the fourth before pitching back with a pop-up and a strike out looking to Robbie Tenerowicz. He also induced a 4-6-3 double play in the second and sixth innings.

Top hitter: Kacy Clemens, 1-5, HR, 3B. Clemens hit his second home run of the series in the fifth inning, knocking in three runs for a 6-0 lead. It came on a bomb to right field off of reliever Aaron Shortridge.