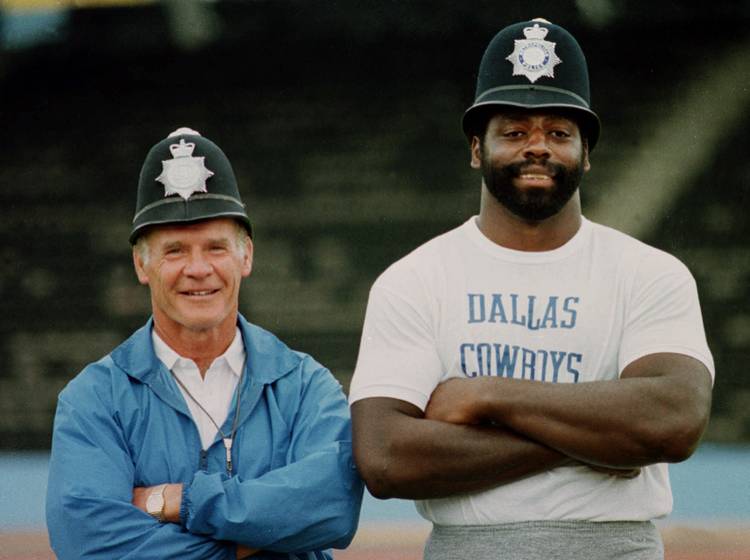 Dallas Cowboy's coach Tom Landry, left, and player Ed "Too Tall" Jones, smile as they try on helmets borrowed from a couple of London "Bobbies' during a training session in London in ths July 28, 1986 photo. The Cowboys were preparing to play the Chicago Bears. Landry's death Saturday night, Feb. 12, 2000, has once again spurred reflection on his legacy. After dusting off the old stories and statistics, his accomplishments are even more impressive today. His 270 victories are third-most inNFL history. His teams reached five Super Bowls, winning two, and they had a winning record for 20 straight seasons. (AP Photo/Gerald Penny)

Koy played six seasons and made the 1967 Pro Bowl for the Giants after being the 141st pick of the draft. Weirdly, he was taken 18th overall by the Houston Oilers in the AFL draft. I guess the Oilers really believed in him. Koy rushed for 704 yards and scored four touchdowns for the Giants in his Pro Bowl season. The Giants have taken 25 players since the start of the draft, and Koy is one of two players who have made a Pro Bowl and the only player to have made the Pro Bowl after 1954.

Koy is the son of Ernie Koy Sr., who was inducted into the Longhorn Hall of Fame in 1960. Koy’s father was a two-sport athlete, playing football and baseball, becoming one of the earliest Longhorns to make the big leagues in 1938. The son was a member of the 1963 National Championship team, but he missed most of the season with various injuries. His brother Ted also played at Texas and in the NFL.

The Giants took Thompson, a San Antonio Steele High School product, with the 144th pick in the fifth round. He tore his Achilles tendon in the preseason opener against the Cincinnati Bengals last season and missed the rest of the season.

At Texas Thompson racked up 213 tackles, 125 solo and picked off two passes. He started 31 games for the Longhorns.

The second Longhorn player ever drafted, Rhodes was also the second-ever “Mr. Irrelevant.”  The final player taken in the draft, 200th overall in the 22nd round, Rhodes didn’t play in the NFL.

Of note: Tom Landry was taken 184th overall by the New York Giants in 1947. Landry played punter, long snapper, running back, quarterback and defensive back. He made the Pro Bowl in 1954 and was an All-Pro the same season.

Landry became an NFL Hall of Fame coach and a Texas legend, icon, name of a school in “King of the Hill” and why some Texans will forever hate Jerry Jones when the Cowboys owner fired him while Landry on a golf course.