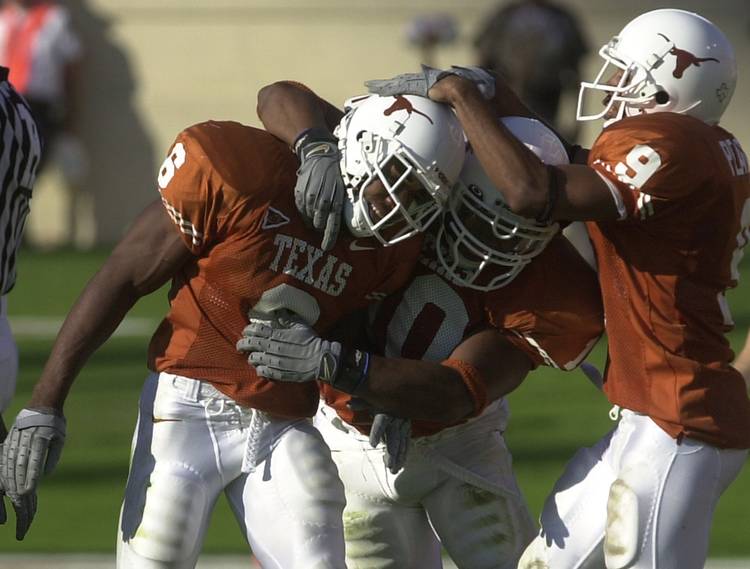 10/20/01-Rodolfo Gonzalez/American-Statesman: University of Texas' #6, Quentin Jammer, left, is jumped on by #40, Cory Redding, center, and #9, Dakarai Pearson, right, after #6, Jammer intercepted a pass during the third quarter of action held at Darrell Royal Memorial Stadium on Saturday, October 20, 2001. The Longhorns defeated the Buffaloes 41-7.

Jammer played 12 seasons in the NFL, 11 with the Chargers and spent most of those seasons as the Chargers’ top corner. He never reached the Pro Bowl, but he did have 21 interceptions and 617 tackles with the Chargers. He was taken fifth overall, ahead of several future all-pros like Dwight Freeney but Jammer is hardly a bust given his longevity and 161 starts for the Chargers. He finished his career with the Denver Broncos, helping them to an AFC champions in 2013.

Jammer is a member of the Chargers 50th Anniversary team.

Conway was the 173rd pick by the Chargers coming in the seventh round. He never played with the Chargers, though, and kicked for the Green Bay Packers in 1971 for one game.

Of note: The Chargers have taken seven Longhorns in the draft. Three of them were defensive backs (Jammer, Mossy Cade and Stanley Richard). Two more picks were also defenivse players (Ray Woodard and Ty Albert). The only every-down offensive player the Chargers have taken is running back Chris Samiels, who played just one season in San Diego.