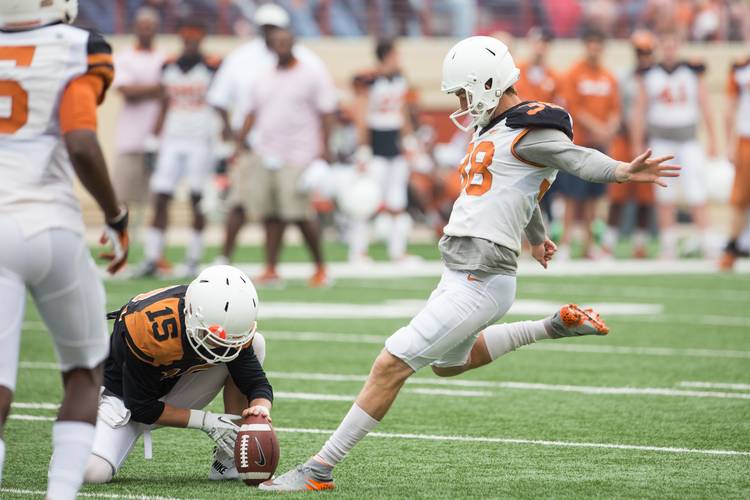 The first time anyone saw punter Michael Dickson, the nervous Australian launched a ball over the practice field fence and onto Red River Street.

The Texas freshman got plenty of chances to hone his craft. He punted 77 times last season, the highest total in the Big 12 and tied for 10th nationally. He averaged 41.3 yards per boot, a respectable number for any first-year punter.

Texas coach Charlie Strong doesn’t have to worry about punter in 2016. Meanwhile, the Longhorns’ kicking situation is an embarrassment.

While other coaches actively recruit top-flight scholarship kickers, Strong is sticking with walk-ons. He has no idea what Evan Moore or Jon Coppens will do under any real pressure. All he wants is someone who can be consistent from “35 and in.”

“We didn’t rush them the whole spring, so just step up there and kick the football and put it where it needs to be,” Strong said. “The guys have enough leg strength and all that, it’s more mental than anything.”

What exactly is a 35-yard field goal anyway? Typically, that means the offense reached the 18-yard line. Tack on seven yards for the holder and another 10 to reach the crossbar in the end zone.

The Longhorns collected points on 30 of 34 trips inside the opponents 20-yard line last season. Only trouble was that UT’s 34 red-zone appearances was the second-lowest total in the league.

If the offense improves this season, an inexperienced kicker might turn out OK. Conceptually speaking, of course.

“We have guys that are on the team right now,” Strong added. “It’s just a matter of them stepping up and making sure they are accurate and kicking the ball.”

Cross your fingers. Strong sure has.

In the return game, senior Daje Johnson averaged 10.7 yards on punts and 24 yards on kickoffs. Kris Boyd and Ryan Newsome both had opportunities to return kickoffs last season. Strong prefers to have someone extremely reliable back there. He’d almost prefer a punt returner to call for a fair catch and, you know, actually catch the ball than have a flashy return.

Here’s a look at the punters and kickers on UT’s roster:

1. Michael Dickson: Despite having no previous experience playing American-style football, Dickson had 17 punts go more than 50 yards last season. He also had 19 downed inside the opponents’ 20-yard line. With time and development, there’s no reason to think Dickson can’t be a four-year starter.

2. Mitchell Becker: The junior from League City has not seen game action since arriving at UT. He missed a 46-yard field-goal attempts during UT’s Orange-White game.

3. Matthew Sims: The junior from Dallas has not seen game action since arriving at UT.

4. Evan Moore: The sophomore hit 7 of 8 field goals, including a 53-yarder, during his senior year in high school at Aubrey.

5. Jon Coppens: The redshirt freshman and business major is smart as a whip. He also connected on 8 of 10 field-goal attempts as a senior at Fort Worth Nolan Catholic.

2015 review: Some die-hard fans will never forgive senior kicker Nick Rose for missing that extra-point attempt against California. But look at the whole picture. Rose had a solid year overall, hitting 13 of 17 field-goal attempts and 38 other extra points. Rose was 7 of 8 on field goals in the last four games, missing only from 53 yards. He also averaged 63.1 yards per kickoff and registered a touchback almost three out of every four attempts.