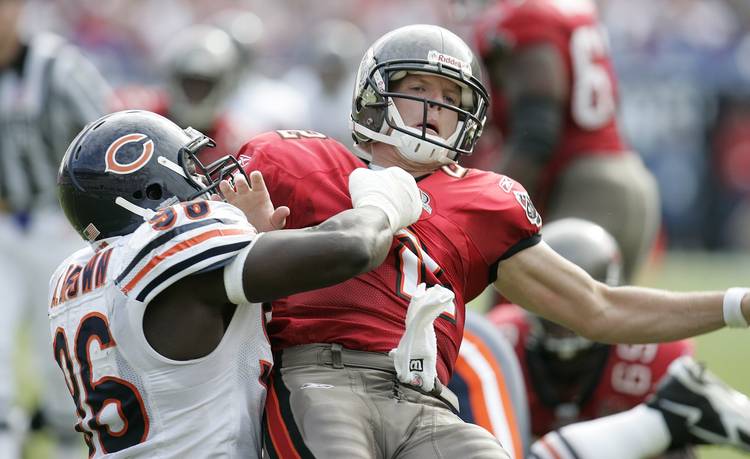 For all the criticism Simms got at Texas, he surges ahead among the four Tampa Bay Longhorn draft picks. Simms’ quarterback battle with Major Applewhite will be debated for years to come in Austin.

However, that debate was fueled because of Simms’ lofty potential. At one time, Simms was considered a possible No. 1 pick in the 2002 NFL Draft. Maybe he could have been if he left Texas a year early and instead of the Texans taking David Carr, they could taken Simms. The quarterback class wasn’t great… I mean, David Carr went No. 1!

Who knows? Simms returned to school, had his best season at Texas as a senior and was taken in the third round, 97th overall. So maybe not.

As a Buccaneer, Simms played three seasons and became the starting quarterback in his second season. He was starting to breakthrough before being seriously injured in 2006 when his spleen ruptured, and he nearly died. He was never really a starting option again and missed all of 2007. He was a back-up in Tennessee in 2008 and again in Denver in 2009. For his career, he threw for 3,117 yards and 12 touchdowns.

Simms is the best pick because it’s hard to quarterback a team to the NFL playoffs, and he did that in 2005.

Simms’ numbers at Texas were very solid. As a junior, he threw for 2,603 yards and 22 touchdowns and completed 59.1 percent of his passes. Is that good enough for the Texans? He returned for his senior year and threw for 3,207 yards and 26 touchdown (12 interceptions) as a senior.

Miller was the 81st pick of the 2009 draft in the third round. He spent four seasons in Tampa Bay, starting all 16 games in 2010 and started 14 games in 2012. He had 96 career tackles at Tampa Bay. He played the last three seasons with the Jacksonville Jaguars and is on the roster this season. in 2014, Miller won the Ed Block Courage Award.

Miller was the Fiesta Bowl Defensive MVP in 2009 for the Longhorns and also was a first team All-Big 12 selection in 2008.

Drafted 254th overall in the 10th round, McCune never played in the NFL.

Of note: The fourth player we haven’t covered is Fred Acorn, who was taken in the third round in 1984, 57th overall. The defensive back played one season, started one game and picked off one pass.