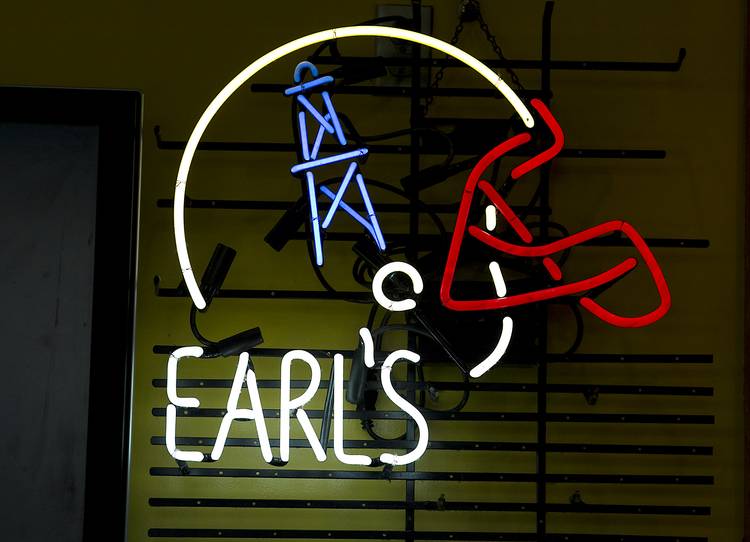 Earl Campbell's Sports Bar offers a menu of sausage items from the legendary University of Texas and Houston Oiler football player. With SXSW in full swing the Austin Bergstrom International Airport is a hotspot for world travelers and the food selections in the concourse offer a taste of Austin flavor. RALPH BARRERA / AMERICAN-STATESMAN

The man has a sausage company. Basically means he’s reached the level that only one other Texas athlete has reached, Nolan Ryan.

If you’re an athlete and you put your name on sausage and sell it in Texas, chances are you’re one of the greatest athletes to hail from the Lone Star State.

With the Oilers, Campbell had more than 300 carries in a season five times in nine years. He rushed for 9,407 yards in nine seasons. He led the NFL in rushing his first three seasons and went to five Pro Bowls and was a 3-time All-Pro.

He was inducted into the NFL Hall of Fame in 1991.

At Texas, Campbell was a two-time All-American, the 1977 Heisman Trophy Winner (the first Texas winner) and is a member of the College Football Hall of Fame. At Texas he rushed for 4,443 yards and 40 touchdowns.

Until this offseason, Griffin had played his entire career with the Titans. He signed with Minnesota Vikings after being released by the Titans following nine seasons and one Pro Bowl. He has 25 career interceptions and 192 tackles playing free safety.

At Texas, Griffin was a hometown talent, having played at Bowie High School and went on to play four seasons at Texas from 2003-06. He was a first team All-Big 12 and a second team All-American. As a senior he has 126 tackles, 79 of them solo, and four interceptions. He was inducted into the UT Men’s Hall of Fame last year.

Griffin was taken 19th overall in 2007, which is also the year that more Longhorns were drafted than ever before in the seven round era.

Lee was taken 40th overall by the Oilers in the AFL draft, but he decided to play in the NFL. He was drafted by the Philadelphia Eagles, but never played there and landed in St. Louis before ending his career after four seasons with four different teams.

Of note: The Oilers and Titans, famously owned by Bud Adams until his death in 2013 loved taking Texas players. Adams lived in Houston and made his fortune in, what else, gas and oil. The University of Kansas alum loved local products. He drafted Earl Campbell, from Tyler, Vince Young, from Houston and in total, the franchise has taken 18 Longhorns since 1961. They’ve used five first-round picks on Longhorns (Campbell, Young, Tommy Nobis, Scott Appleton and Griffin).

Side note: Vince Young was taken third overall by the Titans. Vince Young may be the greatest Longhorn quarterback ever.