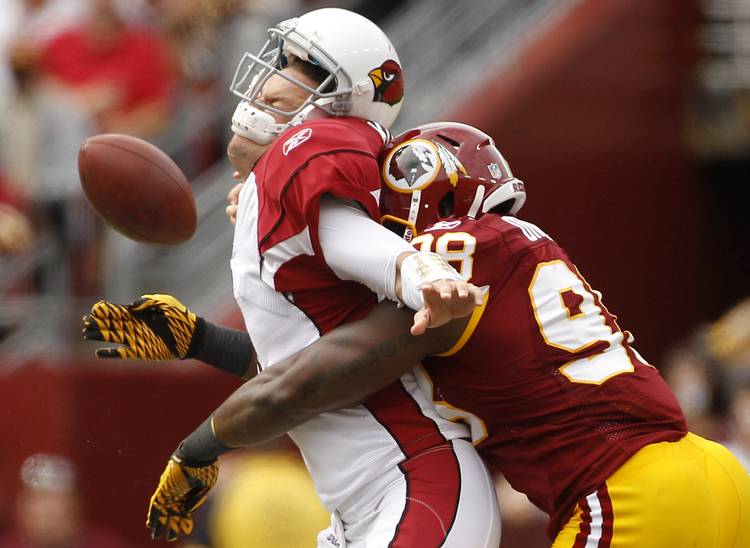 In this Sept. 18, 2011 file photo, Arizona Cardinals quarterback Kevin Kolb, left, is sacked by Washington Redskins outside linebacker Brian Orakpo in the first half of an NFL football game in Landover, Md. (AP Photo/Evan Vucci, File)

Earl Thomas is on pace to be a legend. Brian Orakpo was on the same pace before injuries de-railed him a little bit. Orakpo went to the Pro Bowl his first two years in the league in 2009 and 2010 after being drafted 13th overall by the Redskins. He had 11 sacks as a rookie and 8.5 his second season. Then he had a series of injuries starting in 2012 that limited him to two games. He returned in 2013 and went back to the Pro Bowl, but then played in only seven games in 2014 when he suffered another season-ending injury.

He signed with Tennessee in 2015 and started all 16 games and getting seven sacks.

Orakpo had 40 sacks in six seasons with the Redskins and was the star of this Geico commercial:

Robinson has started 21 games for the Redskins since being taken 119th overall in the fourth round. He had 71 tackles in 2014. He was honorable mention All-Big 12 as a sophomore in 2009.

Sanders was a Pro Bowler and a two-time All-Pro for the New York Yankees, but he was the sixth pick of the 1942 draft by the Washington Redskins.

At one point, Sanders was the league’s all-time single-season rushing leader when he went for 1,432 yards in 1947. He’s not in the NFL Hall of Fame, and that angers some people.

Of note: Terry Orr was the 263rd pick in 1985 and played eight seasons with the Redskins. The tight end won two Super Bowls and played in 105 games in his career.  Orr rushed for 580 yards in 1984 for the Longhorns.

Orr eventually was sentenced to 14 months in prison for defrauding three former Redskins players, including Hall of Famer Art Monk after he tried to start a shoe company. Orr’s son Zachary is a member of the Baltimore Ravens.