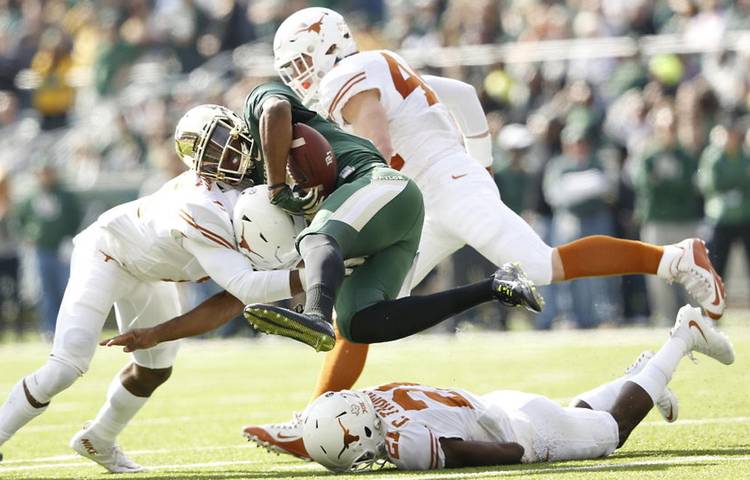 Once the NFL draft was completed, the frenzy began for teams to acquire free agents. Texas saw multiple players scooped up before dinner.

Cornerback Duke Thomas agreed to terms with the Houston Texans. Thomas started 35 games during his UT career and was an honorable mention all-Big 12 pick last season.

Got something to prove ..

A pair of Longhorns are headed to Atlanta. Receiver Daje Johnson and kicker Nick Rose both reached agreements with the Falcons.

Johnson was in and out of UT coaches’ doghouse at times, but he was always one of the fastest players on the field. After playing 38 career games, Johnson ranks fourth in Texas history in kickoffs (44), seventh in kick return yardage (976) and 10th in average kickoff return yardage (22.2).

Rose was the team’s starting kicker in 2014 and 2015. Last season, he was 13 for 17 on field-goal attempts and 38 for 39 on extra-point attempts. Rose’s real strength was his kickoff ability. He boomed touchbacks on three of every four kickoffs.

Officially an Atlanta Falcon. Can't wait to get to work #RiseUp

Receiver Marcus Johnson tweeted that he’s headed to the Philadelphia Eagles. Johnson started in 14 games the last two seasons and finished his UT career with 61 catches for 793 yards and four touchdowns.

Defensive end Shiro Davis also signed with the Washington Redskins, according to the Houston Chronicle. Davis started the first four games of last season and finished the year with a career-high 29 tackles.

Defensive tackle Hassan Ridgeway was the only Longhorn drafted over the seven rounds. The Indianapolis Colts grabbed Ridgeway in the fourth round. Texas has seen only six players drafted in the last three years.

However, not being drafted does not mean a player’s NFL dreams are dashed. Defensive end Jackson Jeffcoat was not drafted in 2014 and signed with the Washington Redskins as a free agent. He played two seasons with the Redskins and then was claimed off waivers by the Cleveland Browns.

Instant reaction: Horns blanked 3-0 by OSU in game one of doubleheader