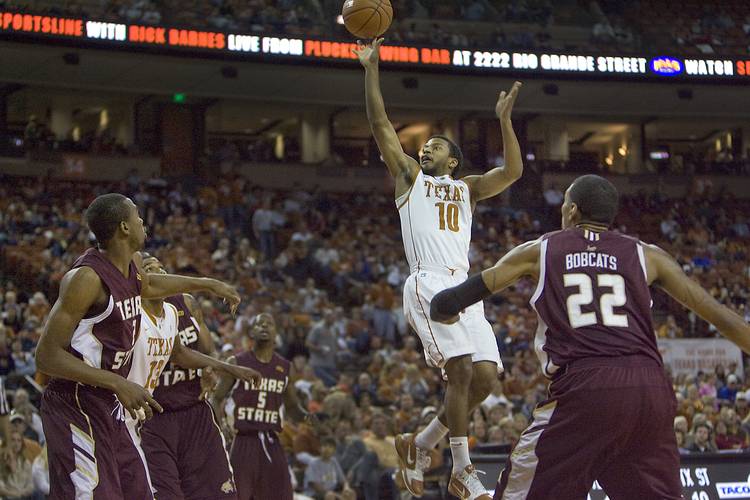 At some point this year, Jarrett Allen will make a decision on where he wants to play basketball for the impending future. Until then, we’re left with Allen sending out tweets like this:

Us Texas bigs are indecisive lol…

And when he does commit, Texas coach Shaka Smart, Kansas coach Bill Self, Houston coach Kelvin Sampson and fan bases of those schools can get on with their lives, hug their children, take their dogs on walks and reflect on what has been one of the most dragged-out recruiting battles in this year’s 2016 cycle.

But the recruiting season isn’t over for any of the teams involved in the Jarrett Allen chase, especially for Texas. Even if Texas lands Allen, they still have scholarships to fill. And if Texas wants to be the darkhorse in the Big 12 and make a strong play to return to the tournament, having more scholarship players would be helpful.

Once Isaiah Taylor announced that he was entering the NBA draft and signing an agent, Texas had seven available scholarships. Three of those scholarships are slotted for incoming freshman Andrew Jones, James Banks and Jacob Young (they’ve all signed National Letters of Intent). Another scholarship is headed for Dylan Osetkowski, who will sit out this season per NCAA rules.

Who could they go to? LG Gill is a graduate transfer from Duquesne who is considering Texas. Gill is 6-foot-8-inches tall and 220 pounds and would be a nice fit in the forward-light current make-up of the Longhorns. Gill averaged 10.1 points and 6.5 rebounds last season. Outside Gill, there’s not much chatter about possible transfers to Texas, at least of the graduate variety that could help right away.

The high school prospect pool for the Class of 2016 is increasingly shrinking as summer approaches.  Only five of ESPN’s top 100 players remain uncommitted and Texas is only in serious contention (as of now) for Allen.

Texas promoted its director of basketball operations Jai Lucas to assistant coach over the weekend. Lucas will now be an on-the-court coach and allowed to recruit off campus. The NCAA only allows four assistants on the bench. Lucas has never held any assistant coaching jobs and has never been an off campus recruiter.

But he was a wanted man last week.

Reports surfaced  that first-year TCU coach Jamie Dixon was set to hire Lucas as an assistant. But the very next day, those rumors were extinguished by ESPN college basketball reporter Jeff Goodman.

Sounds as though Shaka Smart will keep Jai Lucas on staff. Lucas was close to joining Jamie Dixon's staff at TCU as an assistant.

The next day, Texas made the move to promote Lucas and demote Mike Morrell, a move that Goodman and others found odd.

Shaka Smart demoting Mike Morrell off the road to move Jai Lucas up, per source. Like Jai, but Morrell got majority of players in UT class.

Sure is. This is a head-scratcher by Shaka. https://t.co/0dXubvvmIG

Mike Morrell, who came to Texas from VCU with Shaka, will get an as-yet-undecided title. This move takes him off the road in recruiting.

I don't know many competitive people who want to go backward in their chosen profession. https://t.co/naaVWmfjDz

Also, for those wondering, Texas assistant Darren Horn has been lead recruiter on Jarrett Allen. Well, Horn and Shaka.

Making sense of the move:

Why all the fuss over Lucas? Well, it may be because Lucas has deep basketball ties in the state.

His father is famed life coach and basketball guru John Lucas, the former NBA head coach and Houston Rocket who is still based in Houston. John Lucas trains and mentors many of the state’s and nation’s  top basketball talents.

While there are rumors that Jai Lucas has a relationship with Allen because of his dad, his promotion may be less about beating Kansas and Houston for Allen and more about Smart assessing his staff’s in-state recruiting performance in the 2016 cycle and thinking big picture.

Texas landed Andrew Jones of Irving MacArthur (247 Sports’ No. 5-rated Texas prospect), and the Texas coaching change in 2015 probably hindered their ability to grab the state’s top prospect, soon-to-be Kentucky point guard De’Aaron Fox of Katy Cypress Lakes (he committed last October). But when McDonald’s All-American Terrance Ferguson decommitted from Alabama in January and opened his recruitment back up, Texas was seemingly in the mix for the No.2-rated player in Texas. Then Ferguson, of Dallas, committed to Arizona in April.

Marquise Bolden is also waiting to commit, but Texas has been unable to break the stranglehold Duke and Kentucky have on the top-25 recruit and 6-foot-11-inch center from Desoto.

Still, if Texas lands Allen the Longhorns will have added three of the state’s top 10 players, which is more than any other in-state program. Even if they don’t land Allen, they’ll still have the most top 10 Texas players committed (two). But with seven scholarships Texas had, and four scholarships that were available in the spring, maybe Smart expected more considering the lofty goals he had last fall for in-state recruiting.

Looking at the state’s 2017 prospects that currently includes four five-star prospects and has just one top-10 player, Tristan Clark of Converse Judson, committed to any program (Baylor), Smart’s move to beef up in-state recruiting before the summer season makes some sense.

Golden: It’s the beginning of the end for Augie ball at Texas