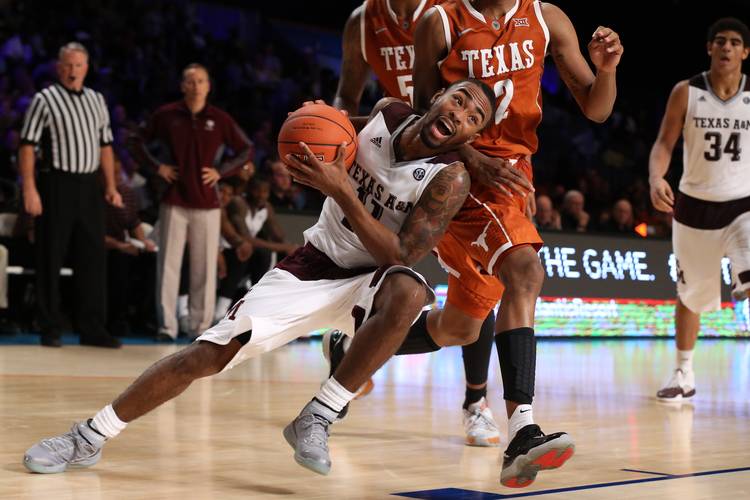 Texas A&M guard Anthony Collins works his way under Texas' Demarcus Holland during the Aggies' 84-73 win over the Longhorns at the Battle 4 Atlantis tournament. (Photo by Atlantis, Paradise Island)

The SEC and Big 12 Challenge is giving the college basketball world the game everyone wants to see in this conference street fight, but some of these other games lack a fraction of the excitement.

Yes, Kansas and Kentucky is going to be a fantastic rematch of one of the best challenge games from last season. Now two of the bluest of blue bloods will play in Rupp Arena next January. It’ll be a matchup of two teams who will enter the season with national title expectations.

But then the question has to be floated: is anyone really jazzed-up about that Texas-Georgia matchup? What about that heavyweight tilt between Baylor and Ole Miss?

We’re not saying that Texas-Georgia will be a bad game. The Bulldogs, who were 20-14 last season, may be good next season. They have a strong recruiting class coming in, their coach avoided death in April and this is just one game on a Saturday in Georgia. It means little.

But if you’re going to do something like this, Big 12/SEC, why not give us Texas-Texas A&M, like the Battle for Atlantis did last season. I don’t need to waste blog space explaining that one.

Considering conference expansion took away this rivalry game, along with Kansas-Missouri, it’s the least the challenge can do to make up for it.

Texas- Arkansas and Texas-LSU would have carried more weight than Texas playing a team they haven’t faced since 2002-03 . And it’s not like this is a one-year thing. Texas played Vanderbilt last season at home. The last time a Texas-Vanderbilt meeting was important, it was 150 years ago and it probably involved railroads.

South Carolina isn’t even involved in the challenge. That’s strange since South Carolina is a rising program and could have made an interesting game with Texas (coach Frank Martin vs. Texas’ Shaka Smart) or West Virginia (Frank Martin’s mentor is WVU’s Bob Huggins) or how about Martin’s new team playing his old team, Kansas State?

Texas vs. Texas A&M: Get it done, conferences.

Kansas vs. Missouri: Get it done, conferences.

Texas vs. Arkansas: Havoc vs. 40 minutes of hell (if Mike Anderson is still there next season).

West Virginia vs. Kansas State: Remember when Bob Huggins was the coach in Manhattan?

Baylor vs. Tennessee: Because Rick Barnes isn’t a fan of Scott Drew.

Iowa State vs. Alabama: Because Steve Prohm went to Alabama, and the Crimson Tide didn’t hire him as their head coach.

South Carolina vs. Read above.

At the end of the day, the challenge is doing its job by putting Kansas and Kentucky in a game, and these games don’t matter that much.