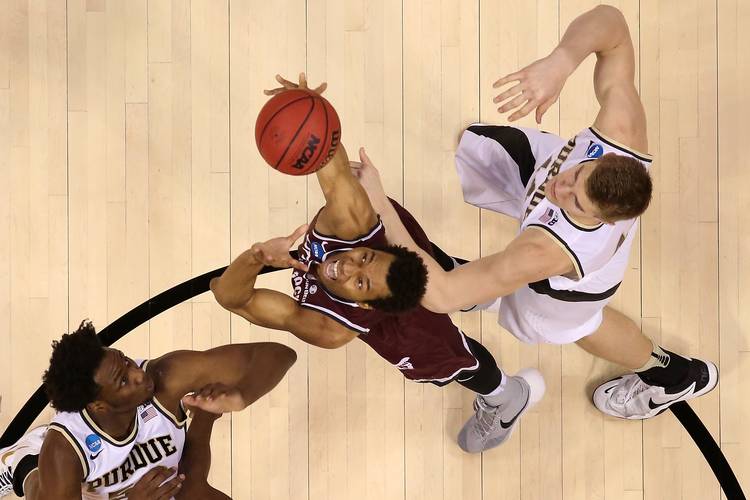 Arkansas-Little Rock's Mareik Isom grabs a rebound while being guarded against Purdue's Isaac Haas during the first round of the 2016 NCAA Men's Basketball Tournament at the Pepsi Center on March 17, 2016 in Denver, Colorado. (Photo by Sean M. Haffey/Getty Images)

Texas has reportedly added a 6-foot-9-inch power forward and Austin-area product to its 2016-17 men’s basketball roster.

No, it’s not who you think.

Mo Isom, a grad transfer from UALR, is on campus today and will enroll in Summer I at Texas, his father says. Isom eligible immediately.

But with a handful of scholarships still available for Shaka Smart’s second Longhorn team, Texas will take Mareik Isom.

Various reports say Isom, who attended St. Stephen’s for two seasons before ending his high school career and graduating from Bowie High School, will transfer to Texas after graduating from Arkansas-Little Rock in December 2015. He’ll be eligible immediately.

Isom, who grew three inches since his Bowie days, averaged 19.1 minutes per game along with 5.9 points and 2.7 rebounds for the Trojans, who stunned fifth-seeded Purdue in the NCAA Tournament in March.

Isom shot 39 percent (42-of-106) from 3-point range last season and was even better from beyond the arc as a sophomore at 45 percent for the season, which was tops in the Sun Belt Conference.  He had a season-high 16 points against Texas State last season and played in all 34 games for Little Rock, starting nine.

With incoming freshman forward James Banks and senior forward Shaquille Cleare the only front court players currently on the roster, the lengthy Isom is likely to make an instant impact on a Texas roster still waiting for 2016 McDonald’s All-American center Jarrett Allen of St. Stephen’s High School. Allen didn’t sign his letter of intent, but could be coming to Texas (or Houston or Kansas, we don’t know for sure) next season.