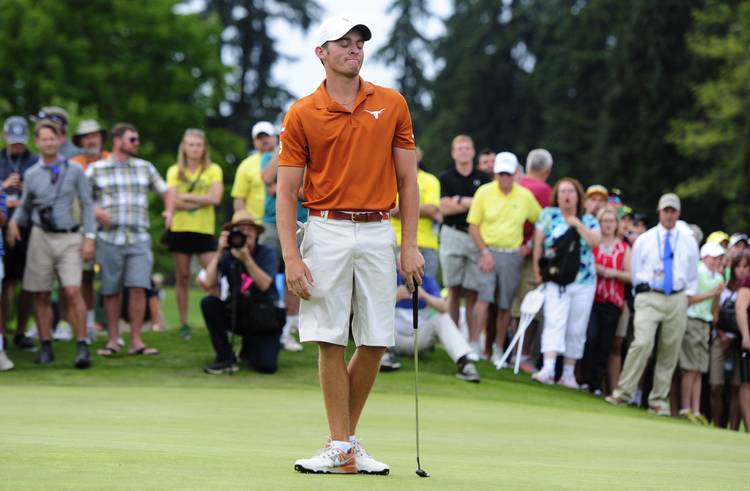 Taylor Funk of Texas reacts to missing a putt on the 20th hole of play during the final round of the 2016 NCAA Division I Men's Golf Championship at Eugene Country Club on June 1, 2016 in Eugene, Oregon. (Photo by Steve Dykes/Getty Images)

In one of the most dramatic moments in Texas golf’s storied history, Taylor Funk drilled a five-footer on the par-4 18th to force a playoff and two more ice-cold putts to reach a third playoff hole.

But Oregon’s Sulman Raza rolled in a clutch birdie putt to defeat Funk in the final match Wednesday of the NCAA men’s golf championship as the Ducks won their first national title in school history.

Texas’ Scottie Scheffler knocked off the NCAA’s best while Doug Ghim captured a key win with one hole remaining. However, it wasn’t enough for the Horns.

“It’s going to be stinging,” UT coach John Fields said immediately afterward. “And it will be stinging until we get here next year. They are highly competitive guys and they want to win badly.

Despite the defeat, the Longhorns will fly home knowing they put forth one of the best showings in program history.

Beau Hossler, the team’s No. 1 player, was sidelined due to a shoulder injury suffered in the semifinals against USC. With Texas unable to swap in for an injured player, the Horns started the day trailing the Ducks 0-1 after Hossler forfeited his match.

“Right up until game time, we weren’t sure if he was going to play or not,” Fields said in a statement issued earlier in the day. “It in no way diminishes the fact that he finished fifth in the medal after 72 holes and is 2-0 currently at the national championship for his match play record.”

Oregon’s Edwin Yi got the best of Texas’ Gavin Hall by the score of 4-and-3 in the match-play format.

But Scheffler had seven birdies in 15 holes and defeated NCAA champion Aaron Wise to win UT’s first point of the day.

“There’s no doubt I was pretty nervous out there, but I was able to handle it well,” Scheffler said. “It was a great match.”

When Scheffler clinched his match, Funk and Doug Ghim were all square through 14 and 13, respectively. Both managed to take slim leads over the next few holes, and Ghim actually went 3 up through the 15th.

But both players somehow hit their tee shots on 16 into the water. Funk recovered with a terrific shot from the drop zone and eventually halved the hole against Raza. Ghim missed a bogey putt and conceded the hole, dropping his lead by one.

Funk and Raza were all square after the 17th. Funk pushed his tee shot on 18 into the trees on the right while Raza was in the fairway. Meanwhile, Ghim won his match on the 17th with a short putt that swirled around the cup and went down.

Longhorns in the NBA Finals: The few, the proud, the Finals performances