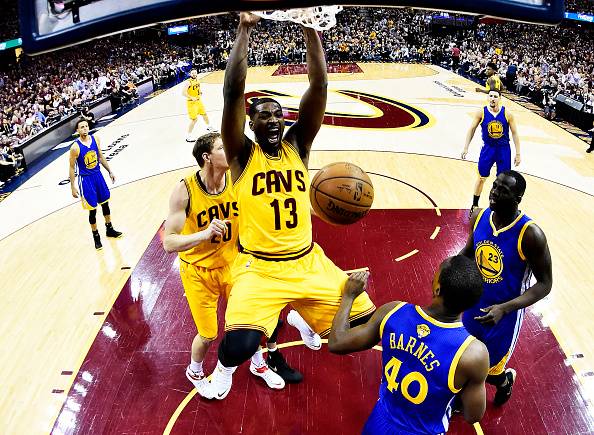 CLEVELAND, OH - JUNE 09: Tristan Thompson #13 of the Cleveland Cavaliers dunks against Harrison Barnes #40 of the Golden State Warriors in the first half during Game Three of the 2015 NBA Finals between the Golden State Warriors and the Cleveland Cavaliers at Quicken Loans Arena on June 9, 2015 in Cleveland, Ohio. NOTE TO USER: User expressly acknowledges and agrees that, by downloading and or using this photograph, user is consenting to the terms and conditions of Getty Images License Agreement. (Photo by Larry W. Smith Pool/Getty Images)

Former Texas forward Tristan Thompson and his Cleveland Cavaliers are in the NBA Finals for the second year a row, meaning that for the fifth year in a row a Longhorn will be playing for an NBA Championship.

Outside of Kevin Durant, who led the Thunder to the finals in 2012, Thompson has the largest role of any former Longhorn in a finals series as he serves as the Cavs’ professional rebounder. If you watched the Thunder’s near take down of the 73-win Warriors (void of any Texas players for the second year in a row), its obvious that Thompson’s rebounding ability (like last year’s finals) could be a difference maker.

But which former Longhorn who played the finals had the biggest impacts? Here are a few Longhorn final performances:

Martin is the first former Longhorn to player to play in the finals, and the NBA Hall of Famer logged more finals minutes than any former Longhorn player. He’s also just one of two former UT players to win an NBA title. Martin won three titles with the Minneapolis Lakers. Slater wasn’t drafted in the NBA, as the league was still just getting started at the time. But Martin was one of the best players for the NBA’s first true dynasty.

It would be more than 50 years until another Longhorn would make an NBA Finals.

A rookie with the Cavs, “Boobie” Gibson became a rotation player for the breakout Cleveland team that surprised Detroit to make the Finals. He started 16 games for the Cavs and averaged 8.3 points in 20 playoff contest. In the finals against the Spurs, the young Cavs didn’t stand much of a chance. Despite having an emerging Lebron James, San Antonio swept Cleveland. Gibson though played the third-most minutes for Cleveland and started two finals games, averaging 10.8 points. Gibson’s minutes increased in his second season, though his NBA career ended after four years.

Joseph played in all six finals games in 2013 and 43 minutes total. The second-year player scored 11 points. Joseph played just eight minutes in the 2014 finals and scored just two points. But the third  season as a whole was something of a breakout for Joseph. He played 13.8 minutes a game and averaged five points. He started 19 games that season. Once the playoffs began, his minutes decreased to nearly nothing as the Spurs settled into a playoff rotation. The next year, Joseph started 14 games, averaged 18.3 minutes of playing time and averaged 6.8 points. His steady improvement allowed him to sign a 4-year, $30 million deal with the Raptors. he averaged 8.5 points per game for Toronto.

Thompson’s performance against the Warriors in 2015 may be the reason why he received a 5-year $82 million deal in the offseason. Thompson grabbed 13 rebounds a game in the finals, scored 10 points per game and blocked a shot a game. His control of the boards and his ability to play the most minutes any Longhorn not named Kevin Durant has ever played in the finals was a big reason why Golden State didn’t sweep the out-manned Cavs last season. Thompson started all six games and averaged 41 minutes per game. The 24-year old forward will likely play a key role in this year’s finals.

He’s arguably the greatest basketball player to ever play for Texas, and he’s currently one of the five best basketball players in the world and a former NBA MVP. Durant led the Thunder to the finals in 2012. It’s the greatest finals appearance by any former Longhorn (which may not be saying much, so we’ll include the entire Big 12 NBA alumni). In a losing effort, Durant averaged 30 points per game, six rebounds, a block and 2.2 assists. He shot nearly 40 percent from 3-point range and 54 percent from the field.