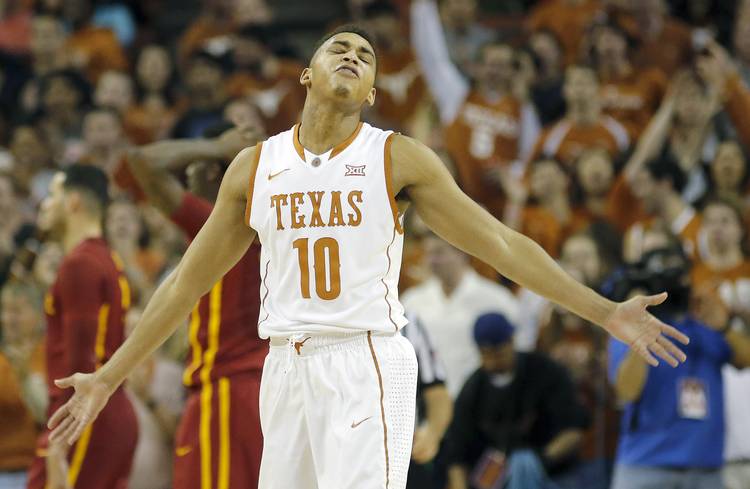 Now that Jarrett Allen has joined the Longhorns, thoughts turn to various possible lineup combinations. Coach Shaka Smart has some intriguing pieces to work with.

G — Andrew Jones, a dynamic scorer considered one of the top 30 recruits in the nation, averaged 30 points, 10 rebounds and seven assists per game last season with Irving MacArthur.

G — Kerwin Roach, one with incredible hops, averaged just 7.5 points last season as a freshman at Texas. Early on, there were times Roach looked lost — like you would expect a newcomer. But he eventually found his footing and his confidence.

G — Tevin Mack, now that he’s had a full year of growth, may get a long look at the small forward spot. Mack could improve his value and see his minutes grow with a more consistent 3-point shot. He was 34 for 114 from long range last season with the Longhorns.

F — Jarrett Allen averaged 20 points and 13 rebounds last season at St. Stephen’s. He also finished the year with five triple doubles. The Horns need some big men to step in and contribute immediately, after losing Cam Ridley and Prince Ibeh. Both Allen and Jones were McDonald’s All-Americans.

C — Shaq Cleare averaged just 3.6 points last season, but to be fair, he wasn’t asked to have a major scoring role. Ridley and Ibeh played most of the minutes early, and Cleare was a third option. He became Ibeh’s backup after Ridley suffered a broken foot. The big man has incredible confidence and loves to bang inside.

Those five names are not meant to be a starting lineup cast in stone, just a first look at a possible five-man lineup.

Smart played the same five starters almost all last season, mostly because they were experience seniors. This year, with a young team, any and all combinations should get a look.

G — Kendal Yancy will be the team’s most experienced scholarship player when the season begins. During his UT career, the rising senior has never averaged more than 6.3 points per game, which he did as a sophomore.

G — Eric Davis still has the potential to be a do-it-all type of guard. It got overlooked last season, but he closed the year strong down the stretch. Davis posted double-digit scoring totals in five of the last eight games. He’ll definitely be in the mix.

F — Mareik Isom, a graduate transfer from Arkansas-Little Rock, isn’t necessarily a consistent double-digit scorer. But he’s got solid outside range and will stretch defenses, much the same way Connor Lammert did.

C — James Banks put up solid numbers in high school, and he’s going to the Team USA Under-18 training camp this July, along with Allen. Don’t sleep on this 6-foot-10 incoming freshman.