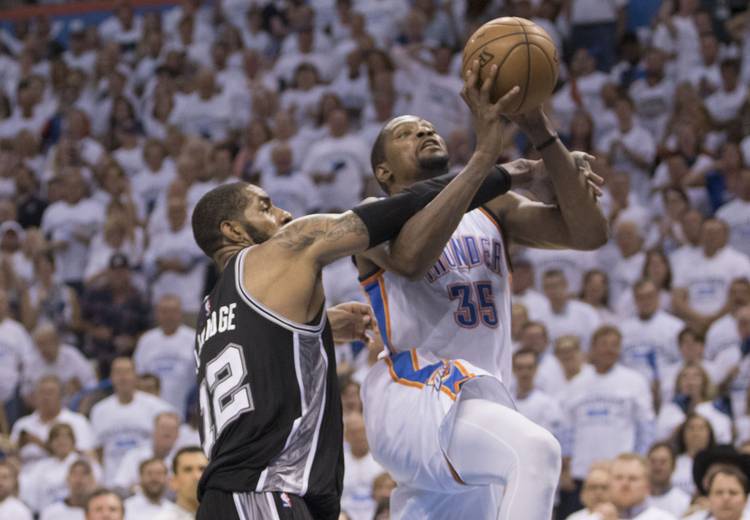 Kevin Durant #35 of the Oklahoma City Thunder drives around LaMarcus Aldridge #12 of the San Antonio Spurs for two points during the second half of Game Four of the Western Conference Semifinals during the 2016 NBA Playoffs at the Chesapeake Energy Arena on May 8, 2016 in Oklahoma City, Oklahoma. (Photo by J Pat Carter/Getty Images)

The one-and-done NBA draft rule turns 10 this week. That’s right, the rule so many have complained about, either for or against, has reached a milestone.

The one-and-done rule has put elite NBA prospects in college basketball for at least year, hence giving some players a higher profile on campus, a national spotlight in March and better TV ratings for the NBA Draft (we think), which is probably why ESPN, owners of the draft’s telecast, is celebrating the one-and-done rule so much.

One way they’ve done this is to torture sports fans who so often play the “would of … should of … could of” game in their minds with this story: What if the one-and-done rule was the three-and-done rule, much like college football.

ESPN listed what they believe would be the best teams of the time frame.

The team would include freshmen Kevin Durant and D.J. Augustin, junior LaMarcus Aldridge and sophomores A.J. Abrams and Connor Atchley.  ESPN’s Jay Bilas writes: “…Texas would be able to score with any of these rosters, but defense and rebounding would be a relative weakness.”

That team would also be pretty deep. Dexter Pittman, Damion James and Harrison Smith were also part of that strong recruiting class.

But if we’re looking at 3-and-done, take a look at what the 2008-2009 would have been. Durant, Augustin, Abrams, James, Smith and Pittman would be back. Added would be Dogus Balbay, Clint Chapman and Alexis Wangmene.

Of course the rules would apply to all teams in college basketball, including the Big 12. So Kansas State would have a three-year run of Michael Beasley and Bill Walker. The Wildcats would be looking at years where all these players would be on the roster: Beasley, Walker, Denis Clemente, Jacob Pullen, Dominique Sutton and Rodney McGruder among others.

Kansas’ 2008 national championship team would include lottery pick Julian Wright. Oklahoma State would have a third year of Marcus Smart.

Rick Barnes could still be the coach at Texas with added successful of years of Tristan Thompson, Avery Bradley, Myles Turner and more.

Andrew Wiggins and Joel Embiid would just be entering the draft out of Kansas (Wiggins also would have played on the same perimeter as lottery pick Ben McLemore his freshman season). Oklahoma would have had a third year of Blake Griffin, and maybe coach Jeff Capel would still be in Norman.

Would Shaka Smart have led VCU to the Final Four in 2011 if their Elite Eight foe, Kansas, also included lottery pick Xavier Henry?

Celebrate the one-and-done rule of college basketball, but just don’t dwell on the “what could have been.”