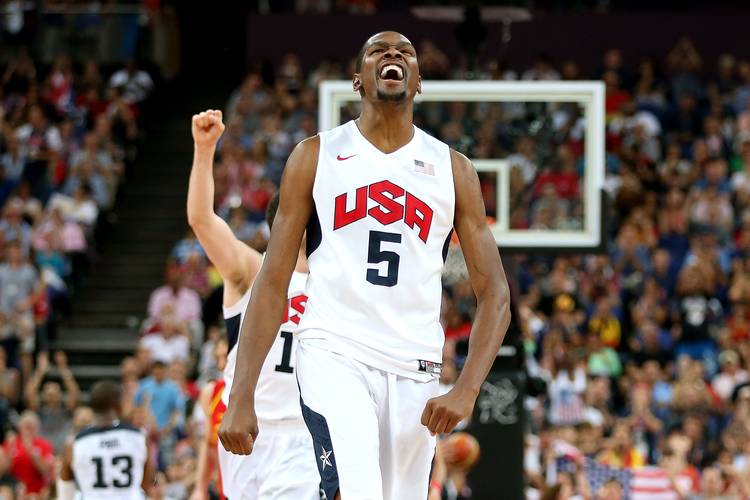 Kevin Durant of the United States celebrates a shot during the Men's Basketball gold medal game between the United States and Spain on Day 16 of the London 2012 Olympics Games at North Greenwich Arena on August 12, 2012 in London, England. (Photo by Christian Petersen/Getty Images)

The former University of Texas star was named to the 12-man Team USA roster that will compete in the Olympics, the USOC announced Monday.

This will be Durant’s second trip, as he led Team USA to the gold medal during the London games in 2012. His 30-point showing in the final tied for the third-highest single-game total in U.S. Olympic history.

It's an honor to be a part of this. #UNITE #USABMNT pic.twitter.com/bCMkNpVniJ

Durant becomes the fourth Longhorn to ever make the national squad and the second to make back-to-back appearances. Albert Almanza represented Mexico in 1960 and ’64.

The Summer Olympics will be held in Rio de Janeiro, Brazil, from Aug. 5-21.

As for his NBA future, Durant has meetings scheduled with at least six teams, ESPN reported. Various reports indicate that Golden State and Miami are the only two teams that could pry Durant away from the Oklahoma City Thunder.

However, Durant could sign another one-year deal with OKC and then secure a bigger max contract after next season.

Does Leo Manzano have what it takes to medal at the Olympics again?