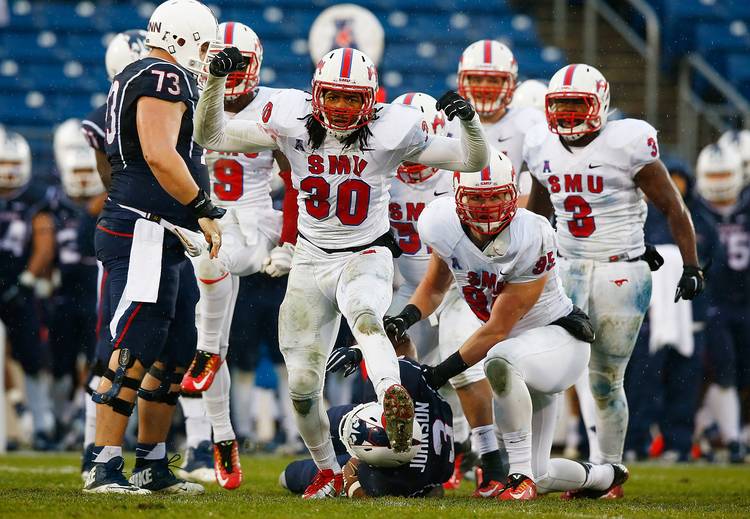 Robert Seals of the SMU Mustangs celebrates a defensive stop in the second half against the Connecticut Huskies during the game at Rentschler Field on December 6, 2014 in East Hartford, Connecticut. (Photo by Jared Wickerham/Getty Images)

Add SMU and East Carolina to the lengthy list of schools that want to join the Big 12.

SMU president R. Gerald Turner and athletic director Rick Hart have provided information to the league office and hope to get a serious look.

“President Turner and I have communicated to the Big 12 our interest in pursuing membership along with the reasons why we would be an excellent long-term partner,” Hart told The Dallas Morning News on Thursday. “We feel that we belong and have assets that no one else can offer.”

The American Athletic Conference has multiple schools under consideration to join the Big 12 — Houston, Cincinnati, UConn, Memphis and Central Florida, in addition to SMU and East Carolina. Any school that leaves the AAC would likely have to pay an exit fee.

A Houston source told the American-Statesman on Thursday that the Cougars’ exit fee would probably be $10 million. Rutgers was required to pay American Athletic officials an $11.5 million exit fee to leave the league and join the Big Ten in February 2014.

East Carolina athletic director Jeff Compher issued a statement on Thursday saying his school was interested, too. Although reports indicated that Big 12 officials have not yet reached out to the Pirates.

“I believe strongly East Carolina deserves to be in the Big 12 as we can deliver the entire state of North Carolina,” Compher said in a statement. “We have been positioning ourself to be the next member for the past 12 months and will continue to do so.”