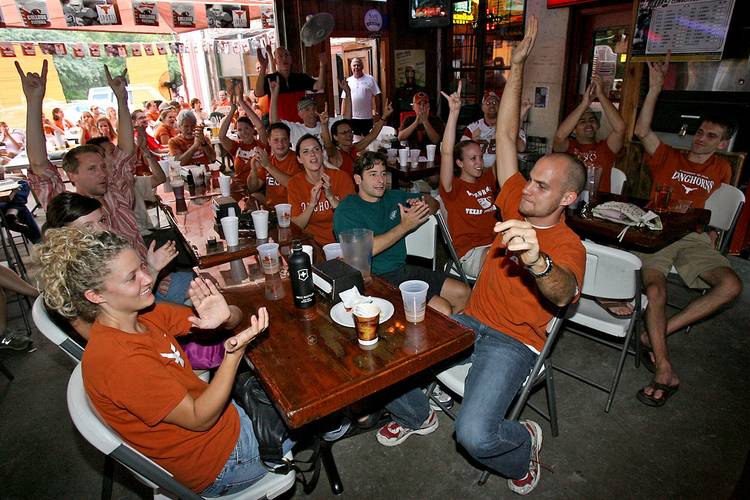 Texas fans have been celebrating wins (and crying after losses) at Posse East for years. (Laura Skelding AMERICAN-STATESMAN)

Is it better to leave Royal-Memorial Stadium and head to bars off Rainey Street or South Congress?

This question was raised after I received an email from another newspaper in the Big 12 footprint. The publication asked writers from all over the league to do a small write-up on their town. Sort of an out-of-towner’s guide to your city. Where’s the best place to tailgate? Where should visiting fans go etc? Things of that nature.

But the final question on the survey left me stumped: After the game, the locals go to…

Understand, it’s not that I can’t come up with a dozen acceptable places. But normally, scribes typically don’t leave the stadium press box until about two hours after. For night games, we’re walking out of there around midnight or later.

So I took to Twitter and asked for some help.

Need some help, Texas fans. I'm answering some Qs for an out-of-towners guide to UT games. "After games, locals go to…" What should I put?

The 140-character suggestions came pouring in.

@BDavisAAS I always went to Pluckers.

@BDavisAAS … talk radio to dissect and complain about the offensive play calling. 🙂

@BDavisAAS Posse East and Crown & Anchor are within walking distance of the stadium.

@BDavisAAS Get a 12pack find a spot & drink, repeat until you’re told to leave

We’re still open for any and all suggestions. Of course, it’s understandable if you want to keep your spot secret. Only 100,000 people will be attending the season opener against Notre Dame. I’m sure none of them will go to the same restaurant as you do.