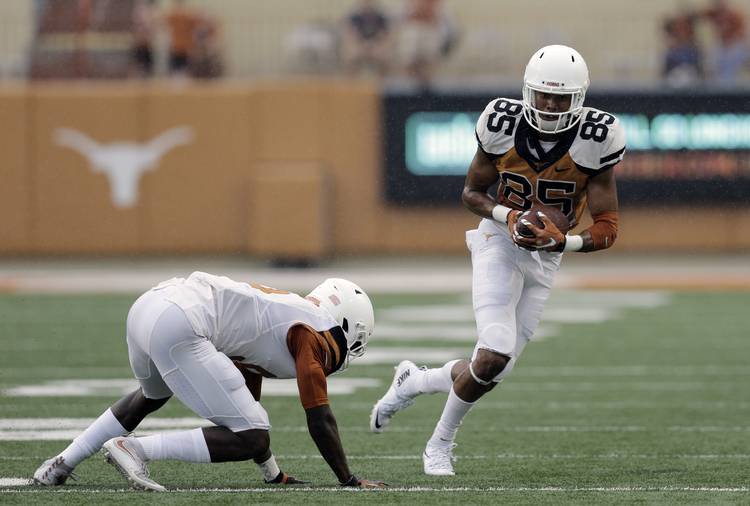 The nation’s seventh-ranked recruiting class from this past year should pay immediate dividends at Texas, which, by our count, could open the season with eight true freshmen on the two-deep.

Quarterback, receiver, both of the lines, and the secondary will rely on fresh faces to fill in depth, if not to start.

Though subject to change once the preseason begins on Saturday, this is how we see the depth chart shaking out for the opener against Notre Dame.

RUNNING BACK: D’Onta Foreman, Jr.; Chris Warren III, So. — Foreman and Warren are both worthy of 20 carries a game, but don’t sleep on Kirk Johnson, assuming he’s good to go after undergoing ACL surgery.

TIGHT END: Caleb Bluiett, Sr.; Andrew Beck, So. — This is mostly a blocking position, but Bluiett is also capable of getting loose for big gains.

LEFT TACKLE: Connor Williams, So.; Jean Delance, Fr. — Williams looks to be a franchise player at a cornerstone position.

LEFT GUARD: Kent Perkins, Sr.; Brandon Hodges, Jr. — Perkins wants to slide inside from tackle and will probably get his wish.

CENTER: Zach Shackelford, Fr.; Terrell Cuney, So. — Shack, the unheralded rookie from Belton, had this job sewn up within days of stepping onto campus this spring.

RIGHT TACKLE: Tristan Nickelson, Jr.; Jean Delance, Fr. — Dominant in this summer’s Battle for the Belts series, Nickelson appears to have improved on his conditioning.

DEFENSIVE TACKLE: Jordan Elliott, Fr; Poona Ford, Jr. — Just a hunch here that the rookie Elliott gets the nod over the undersized Ford.

FOX: Naashon Hughes, Jr.; Breckyn Hager, So. — Blue chip recruit Erick Fowler could stir up the depth chart, but first needs to be cleared to join the team.

INSIDE LINEBACKER: Malik Jefferson, So.; Tim Cole, Sr. — in passing situations, Jefferson will move to the edge to rush the quarterback.

OUTSIDE LINEBACKER: Anthony Wheeler, So; Edwin Freeman, So. — Both will play, and so could freshman Jeffrey McCulloch.

CORNERBACK: Holton Hill, So.; Antwuan Davis, Jr. — After a promising freshman campaign, Hill had some struggles in the spring.

CORNERBACK: Davante Davis, So; Sheroid Evans, Sr. —  Evans hasn’t played since 2013, but was the star of the summer by crushing the lightweight field in Battle for the Belts.

NICKEL: P.J. Locke III, So.; John Bonney, Jr. —  Locke has put on good weight and looks the part of a secondary assassin.

FREE SAFETY: Dylan Haines, Sr.; Brandon Jones, Fr. — At least for now, the former walk-on has the edge over the star recruit.

PUNTER: Michael Dickson, So. — The Aussie had his ups and downs in 2015, but at least was trending upward when the season ended.