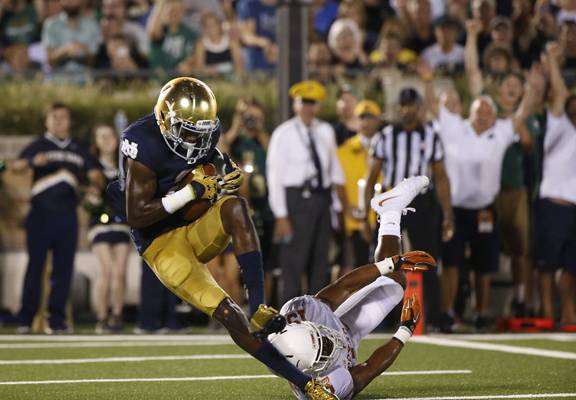 In South Bend, Notre Dame fans get “the shirt” every year.

The “Shirt Project” has been a thing since 1990 and it raises money for student activities. It’s raised more than $17,000 since it started. The 2016 shirt is blue and says “Rise Above” and includes the Notre Dame mascot.

But there’s also another shirt floating around the campus that Irish fans will undoubtedly be wearing on Sept. 4:

A Notre Dame parent sends me this pic showing the Irish have already started the war of words for the UT game. pic.twitter.com/Xs89jUHuJ9

Yes, Notre Dame is 9-2 against the Longhorns. One of those losses is in the 1970 Cotton Bowl when Texas won a national championship. The other loss is one of the biggest wins in Texas program history.

Notre Dame fans aren’t original with this shirt. In 2005, Ohio State fans constructed a shirt that showed an upside down Longhorn logo with the words “messed with it” underneath it. We’d have a link to that shirt, but since Texas won that game in Columbus, and went on to win the title, we’re guessing those shirts didn’t have much of a shelf-life. And were probably destroyed, just like the Buckeyes’ national championship hopes.

Erick Fowler cleared by NCAA to start practice with Longhorns