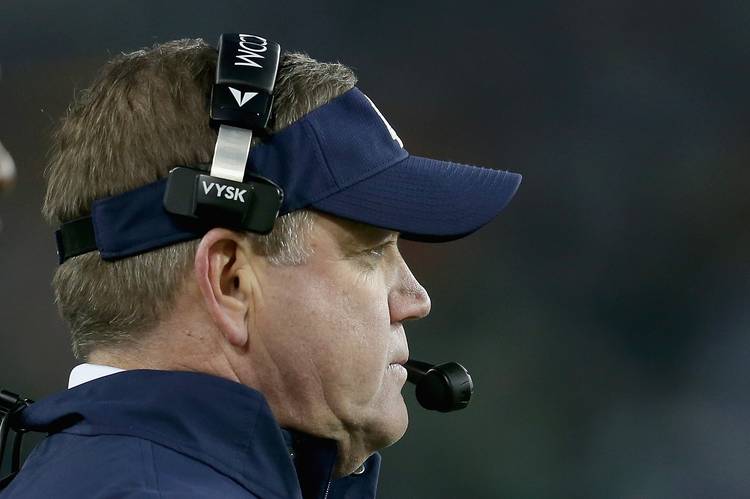 Brian Kelly the head coach of the Notre Dame Fighting Irish watches the action during the Franklin American Mortgage Music City Bowl against the LSU Tigers at LP Field on December 30, 2014 in Nashville, Tennessee. (Photo by Andy Lyons/Getty Images)

Notre Dame coach Brian Kelly announced Sunday that he had dismissed starting safety Max Redfield and suspended cornerback Devin Butler indefinitely after both were arrested in separate incidents over the weekend.

Redfield was a two-year starter who was fourth on the team in tackles last season. He also faces an additional charge for possession with a handgun without a license.

Four other four players arrested with Redfield on misdemeanor possession of marijuana will be disciplined internally, Kelly announced. University officials could impose more penalties on top of what the athletic department decides.

In a separate incident, Butler was arrested during a bar fight between two women. According to police, Butler was asked to move back and the player “shouted profanities at the officers and starting swinging his fist.” One officer was taken to a local hospital for treatment of minor injuries, including a sore wrist.

“There are times when a player’s conduct fails to meet the standards I have set for our football team that it is appropriate to take action independent of any decision that might be made by the Office of Community Standards,” Kelly said. “This is such an instance.”

From a football perspective, Kelly’s decision will hurt the Irish secondary. With Redfield now gone, freshman Devin Studstill is projected to start. His backup is also a freshman. Butler was still rehabilitating a broken foot injury suffered in June. He was not expected to play until October.

No. 10 Notre Dame opens the season against Texas on Sept. 4.