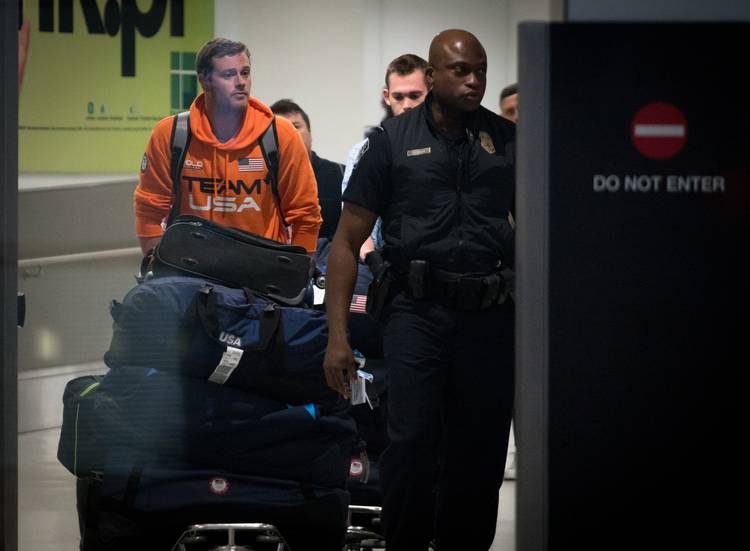 Texas swimmer Jack Conger (left) and Gunnar Bentz are escorted through the International terminal at Miami International Airport upon their arrival to the United States from Rio de Janeiro, Brazil on August 19, 2016 in Miami, Florida. Ryan Lochte, Gunnar Bentz, Jack Conger and Jimmy Feigen were involved in an altercation at a gas station in Rio on Sunday. Bentz and Conger were detained by Brazilian authorities while attempting to fly out of Brazil on August 17. Their claims of being victims of a late-night robbery are being questioned by police. (Photo by Angel Valentin/Getty Images)

RIO DE JANEIRO — Whatever celebration the U.S. Olympic Committee has planned for its return home after a wildly successful Rio de Janeiro Games on the competition front will likely be short-lived.

USOC CEO Scott Blackmun promised Sunday that “further action” will be coming, perhaps soon, against 12-time Olympic medalist Ryan Lochte and three of his U.S. swimming teammates after the story of an armed robbery following a night of partying unraveled and led to Lochte acknowledging he embellished the tale.

Blackmun stopped short of suggesting what any discipline might be, including whether Lochte should ever be allowed to swim for his country again.

Jack Conger, a rising senior at Texas, issued a statement over the weekend explaining his recollection of events from that night with Lochte.

“We all understand that they let down our athletes. They let down Americans,” Blackmun said. “And they really let down our hosts in Rio who did such a wonderful job, and we feel very badly about that. I think we ended up in the right place in terms of being able to shine a light on what really happened there.”

Blackmun said he did not think that the story involving Lochte and the three teammates — all were gold medalists in Rio as part of U.S. swimming relay teams — should be the lasting image of a games where Americans dominated the medal count. Add up all those golds, silvers and bronzes, and no U.S. team ever won more at a fully attended Olympics.

But even USOC chairman Larry Probst said the scandal overshadowed some successes.

“It’s really disappointing that this took place, completely inappropriate,” said Probst, who also is an International Olympic Committee member. “I think the four swimmers are well aware of that now. And unfortunately it has overshadowed some really amazing performances by a lot of great athletes.”

Lochte’s impact on the Rio Games truly started long after his work in the pool was complete. He and teammates Conger, Gunnar Bentz and James Feigen went out clubbing on the night the swimming competition ended. Police have said the swimmers vandalized a bathroom at the gas station and armed guards confronted them and asked them to pay for the damage; Lochte first offered a very different story.

“I over-exaggerated the story,” Lochte told NBC in an interview that aired Saturday. In a separate interview with a Brazilian network, he blamed the mess on his “immaturity.”

Whatever additional scrutiny U.S. athletes faced after the swimming episode didn’t seem to hurt their performance.

There were plenty of those examples.

Michael Phelps won six medals in Rio, sprinting star Allyson Felix increased her Olympic gold collection to six and gymnast Simone Biles won five medals plus got the honor of being the U.S. flagbearer for Sunday’s closing ceremony. Phelps carried the flag into the opening of what he says will be his final games, and now the bearer role — as well as maybe the role of being the face of the U.S. Olympic team — belongs to Biles.

“It’s a huge honor,” said the 4-foot-8 Biles, though she noted she’s a bit worried about handling the weight of the flag.

Stories like hers and many others were the ones the USOC would have preferred to see dominate discussion as the Rio Games end, instead of incessant talk about a mess that could have been easily avoided.

“The things that you do are going to be magnified and the mistakes that you make are going to have a light shined on them in a way that’s going to make it very difficult for you to overcome,” Blackmun said.

USA Swimming and the IOC both could sanction Lochte. IOC member Anita DeFrantz of the U.S. said it’s possible that Olympic officials could simply decide to let the USOC handle the matter.

DeFrantz made no effort to hide her disdain for the incident.

“They have forever put themselves on the kind of list that you don’t want to be remembered for,” she told The Associated Press. “I wish I could feel sorry for them. Instead I feel that they should have been honest from the beginning. What they did was wrong, but what was even more wrong, it was ridiculous that they didn’t stand up and tell the truth.