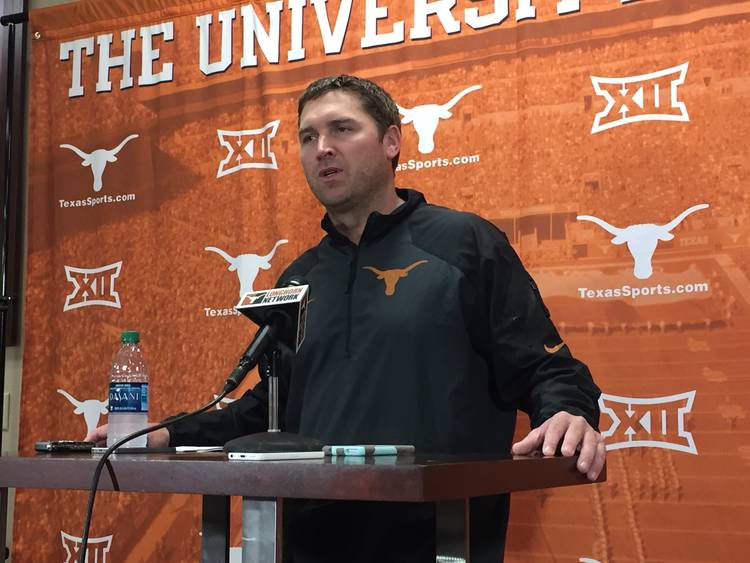 Texas offensive coordinator Sterlin Gilbert left no doubt the entire coaching staff is united on who should be the Longhorns’ starting quarterback “100 percent,” he said.

But as for giving any clues who will start, the San Angelo native didn’t reveal anything more than head coach Charlie Strong did on Monday.

“Naw. Not gonna be today,” Gilbert said in his West Texas drawl. “Nope. Coach (Strong) told you yesterday. We’ll all know on Sunday.”

RELATED COVERAGE: Submit your questions for the weekly Hookem.com Mailbag.

No matter who runs onto the field first against No. 10 Notre Dame, Texas fans should realize the installation of this spread offense is a process. Gilbert learned his style from former Baylor coach Art Briles. It’s naive to think the Longhorns can execute as well Sunday as they might in October and November.

All Gilbert would say is that, “We’re going to go fast until we don’t need to go fast.”

Still, Gilbert said he wouldn’t put any percentages on how much of the offense has been installed for the Irish, a team with only four returning defensive starters.

“At the end of the day, every time we get on the field, we’ll do what it takes to win,” Gilbert said. “You don’t ever know what that’s going to be every time you step on the field. Whatever it takes for us to have one more than they have, that’s what we’ll do.”

Last spring, Gilbert said he purposely did not watch any old video tape. He told other coaches and staff members to keep their opinions of the quarterbacks to themselves. He didn’t want anyone’s bias cluttering his judgement.

“He’s a guy that walks around here with his chin up and head held high,” Gilbert said. “What he is a big, strong, confident, great young man. That’s what he is every day. When he comes in that meeting room, that’s what we expect him to be.”

Gilbert didn’t go as in-depth on Buechele, but fans shouldn’t read too much into that. He’s praised both at the few times he’s met with reporters. “They both have progressively gotten better and we sit where we sit today,” Gilbert said.