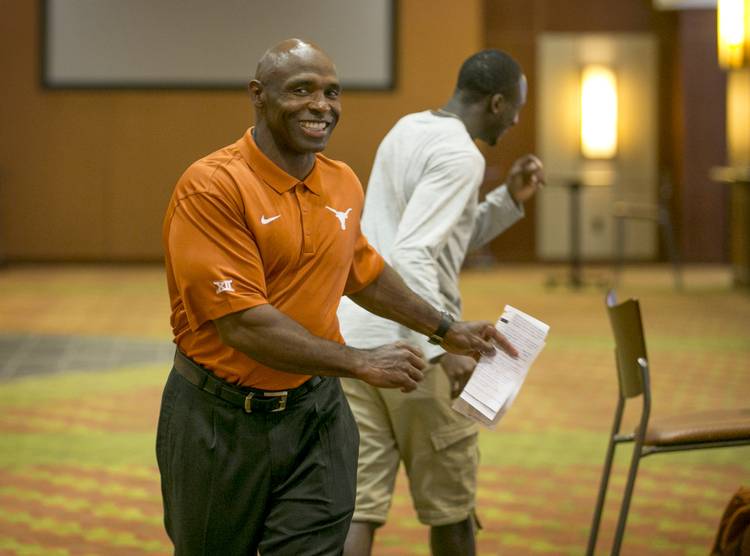 The wait is almost over, Texas fans. The 2016 football season is finally here, and come Sunday, we’ll all know who will be the starting quarterback and whether the Longhorns have made any improvement defensively.

Here in the season-opening installment of The Whys of Texas, we dig into various issues posed by readers.

This space is shaped primarily by the questions receive via email, Facebook, Twitter or any other means of communication. You ask; we answer.

Q. What does strong have to do to return next season?

DAVIS: When I spoke with him about this topic in June, Texas President Gregory L. Fenves said he had no particular number of wins in mind. We all will know whether we see progress or not. That’s his rationale, anyway. So does that mean eight wins? Seven? It’s my belief if Strong goes 8-4 this season, he’ll get a contract extension. If he goes 7-5, it needs to be the right combination of seven wins. Mix in a win over Notre Dame and Oklahoma and don’t get embarrassed (see TCU) and Strong is probably OK. But if he goes 6-6, it will get dicey. The Longhorns have not turned in three straight losing seasons since 1936-38.

DAVIS: If we’re just talking total number of losses, then it’s Oklahoma. The Sooners have beaten the Longhorns 44 times in the Red River Shootout…Rivalry…whatever it is we’re calling it these days. Texas A&M has beaten UT 37 times. Baylor has 26 wins; TCU has 23; Arkansas and SMU have 22. Rice is next on the list with 21 victories, including a rain-soaked UT disaster in 1994.

Q. A common belief, perpetuated by esteemed observers like Ced & Kirk, is that Charlie Strong has to win a certain number of games — they say around 8 — or he’ll be fired at the end of the year.  But from what I’ve read on this website, it appears that the UT president, chancellor, and AD are solidly behind Charlie and will be more patient than the fans or Kirk & Ced. I realize that the big money guys will also have a say in this.  Hopefully, this will all be a moot point after the Horns win 10 games and the Big 12 championship, but if it goes the other way, who holds the trump cards?  How do you think it would go down if the Horns only manage 7 wins or fewer? Thanks.

DAVIS: If you truly understand how the University of Texas system works, you know that Chancellor Bill McRaven won’t pressure Fenves to do something, should that situation reach a boiling point. Fenves is clearly the person in charge. But let’s be honest here. Fenves must listen to key boosters, too. Texas always has a high number of cooks in the kitchen on major issues, but that would ultimately be Fenves’ call. Just like it was Bill Powers’ decision to pass on Alabama coach Nick Saban. Who holds the cards? In my mind, Fenves holds all of them. But he’ll at least have to listen to a lot of people who want to put their two cents in should it come to that. For the record, both Kirk Bohls and Cedric Golden think Strong has a solid season and returns in 2017.

Q. The issue is which quarterback can win, I get it. But if Texas doesn’t fix its defense, they will be like most of the spread offense teams: mediocre at best. If you can’t play defense you will lose, consistently. Has Texas fixed their horrible defense? Thanks.

DAVIS: Well, we will find out Sunday, that’s for sure. The Longhorns allowed 30.3 points per game last season, the second-highest total in school history. Every coach inside Moncrief should feel like they’re on the hot seat this season. Defensive coordinator Vance Bedford is no exception. Texas signed six defensive linemen to bolster its depth up front. Jeffrey McCulloch and Erick Fowler should see playing time at linebacker. I expect to see Brandon Jones get some playing time at safety against the Irish. That’s a lot of freshmen. But it’s also a unit that needs more playmakers. Statistically speaking, the Texas defense can only go one way — up.

Q. Is there a chance we may see Matthew Merrick on the field this year? I would only think this may happen in case of injury, but is he ready for gameplay?

DAVIS: I seriously considered asking about Merrick during Monday’s all-quarterback-question, no-answer press conference with Strong. He faced 14 quarterback questions in 33 minutes, but none were about the now-third string quarterback. Clearly, the coaches feel Merrick is capable of contributing. How else to explain Jerrod Heard and Kai Locksley’s move to receiver in August? I doubt we see Merrick until something drastic happens to Swoopes and Buechele, though.

Q. Bye-bye Charlie — if you start Swoopes, you are gone. At Class 2A Whitewright, 1,000 fans at a game at most, Swoopes was 1-9 his senior year. At 6-4, 240 pounds, he should have been able to score 4-5 times a game and the record should have been 9-1. We are trying to make him into something he is foreign to — a winner. He looks great in shorts but when the bombs start going off and it’s for real, he is scared to death.

— Tom Bagby from Round Rock via email

DAVIS: Yes, it’s true that Swoopes’ high school team was 1-9 his senior year. That victory came against a team that was 0-8. “You can’t line up one against 11,” Swoopes’ mother, Elizabeth, told me prior to the 2014 BYU game. “Regardless of what people say, he had people supporting him on the field and supporting him off the field. That’s the only way he survived, if you call it that.” At Texas, Swoopes is 6-8 as a starter. My issue is that Swoopes has admitted he doesn’t like contact. He’s a notoriously good practice player who struggles in games. I’ll give Swoopes every benefit of the doubt, though. Who knows? Maybe in Sterlin Gilbert’s offense, where you call for a run or pass based on the pre-snap reads, Swoopes thrives without having to make on-the-fly decisions.

Q: What happened to Jerrod Heard. He was so promising against OU.

DAVIS: To me, this is still a perplexing question. In mid-August, sources said there were two issues with Heard. He simply hasn’t progressed as a passer. But Heard is too talented to keep off the field. Long term, his future is probably at receiver anyway. By moving Heard to the slot, it’s a win-win. Buechele is the future at quarterback, and Westlake commitment Sam Ehlinger is waiting in the wings. This move was smart, if unexpected.

Q. What are the chances we can stop the run this year with such a young defensive front seven?

— Eric F. from Dallas via email

DAVIS: One of the biggest reasons for optimism has to be the influx of freshmen linemen, as discussed above. The Horns allowed 219.2 rushing yards last season. That’s the third-worst total allowed in the Big 12. Veterans Paul Boyette Jr., Bryce Cottrell and Chris Nelson must show all these freshmen how to clog up the middle. Defensive ends Naashon Hughes and Charles Omenihu must get some pass rush off the edge. As much as we’d all like to think the defense is better just by being a year older, we won’t really know until Sunday.

To submit questions for The Whys of Texas, readers can email Brian Davis or Danny Davis. Or, fans can submit questions through the Comments section on the BevoBeat page on Facebook or via Twitter.

Episode 24 of On Second Thought: Ced and Kirk preview Notre Dame and chat with Cory Redding