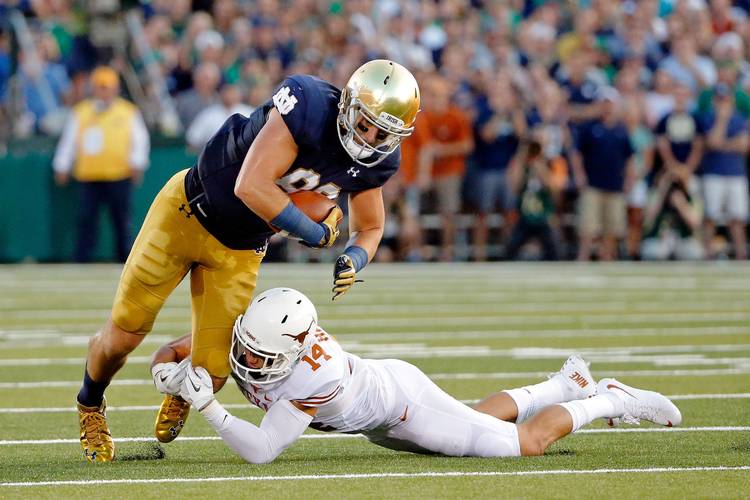 The best part of Sterlin Gilbert’s spread offense is supposed to be its simplicity. The quarterbacks just watch how the safeties align themselves before the snap, then decide to run or pass based on their alignment. Sounds simple enough, right? Remember, this will the first game in the new system with a new play-caller. Notre Dame coach Brian Kelly dismissed starting safety Max Redfield in August, and sixth-year grad senior Avery Sebastian gets the starting nod.

If the Texas quarterbacks are watching the Notre Dame safeties, then Malik Zaire and DeShone Kizer will be keying off UT senior safety Dylan Haines. Arm-chair critics believe Haines should be replaced by DeShon Elliott or Brandon Jones. But Haines has nine interceptions the last two seasons. Still, he was the one who allowed Will Fuller to catch a touchdown right in front of him last year in the zone. Expect the Irish to challenge Haines again, with Hunter the Irish’s biggest receiving threat.

There’s little doubt Duvernay is the fastest player on the UT roster. Nobody’s come forward to challenge him, anyway. Even John Burt, a 110-meter hurdler, laughed when asked who was faster. The Texas coaches must find ways to get Duvernay in the slot lined up against a linebacker so the 5-11 speedster can take advantage of mismatches. Same goes for Jerrod Heard, a converted receiver with terrific slice-and-dice moves.

Manna from heaven. If you’re Charlie Strong, that’s the only way to describe new Longhorns kicker Trent Domingue (pronounced Domain). He transferred to Texas this summer from LSU only after coach Les Miles wouldn’t renew Domingue’s scholarship. Last season at LSU, Domingue was 13 for 17 on field goals and has a career-long of 45 yards. Considering UT has recently struggled with punt returns, getting field goals blocked, missed extra points and botched snaps, the Horns will take someone with a consistent track record.

Texas officials are pulling out all the stops for this one. The 2005 national championship team will be honored at halftime. Olympic gold medalist Kevin Durant and Tristan Thompson will be on hand, as will former golfing Longhorns Ben Crenshaw and Beau Hossler. But Notre Dame counters with 892 all-time victories, six more than UT. And the Irish have a 9-2 record in the teams’ all-times series, including a perfect 4-0 mark in Austin. Texas fans are ready to go all-in emotionally, but they want to see progress first.