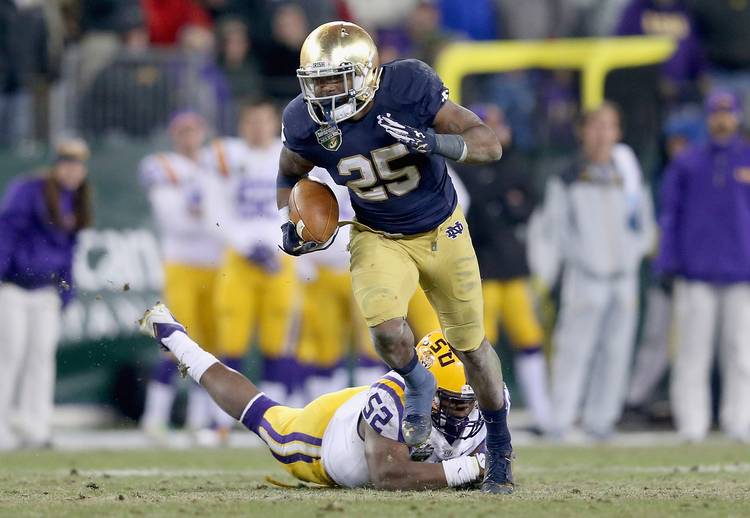 Tarean Folston (25) of the Notre Dame Fighting Irish runs with the ball on the game winning drive in the fourth quarter against the LSU Tigers in the Franklin American Mortgage Music City Bowl at LP Field on December 30, 2014 in Nashville, Tennessee. (Photo by Andy Lyons/Getty Images)

On Sunday night against Notre Dame, the eyes of Texas will be upon …

Folston led the Irish in carries (175), rushing yards (889) and yards per game (68.4) in 2014. But he suffered a knee injury against Texas last season and was lost for the year. Josh Adams stepped in and set a Notre Dame freshman record with 835 yards. Folston and Adams are both on the Doak Walker Award watch list.

Rochell is a Bednarik and Nagurski Award candidate and has 25 starts on his résumé. His 63 tackles last season are the most of any returning lineman. Jarron Jones missed the entire regular season last year with an injury. Andrew Trumbetti had two tackles for loss and a sack in a 44-28 loss to Ohio State in last year’s bowl game.