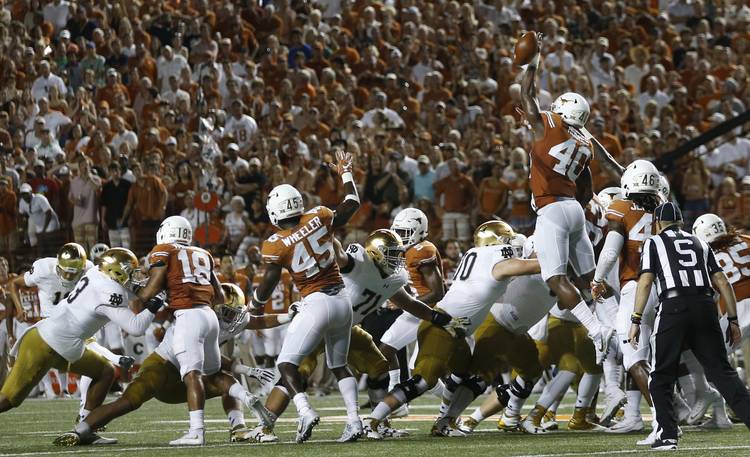 Texas defender Naashon Hughes gets a hand on the ball to block a Notre Dame field goal attempt to keep the Longhorns lead at 31-28 in the second half at Royal-Memorial Stadium on Sunday September 4, 2016. JAY JANNER / AMERICAN-STATESMAN

The game is a sell-out, training camp is over and a new Bevo has arrived: Welcome to the 2016 Texas Longhorn football season.

Texas opens the season against Notre Dame at 6:30 p.m. as Texas fans are anxiously awaiting to learn who the starting quarterback will be in Charlie Strong’s third season.  The rest of the depth chart was announced earlier in the day.

The quarterback question is the biggest story line of the day for the Longhorns, but it’s not the only one.

How many “young pups” will play today?

Is Texas ready to turn the corner?

Longhorn recruits descend upon Austin for Texas vs. Notre Dame

Less than an hour until kickoff, here’s the weather report from DKR