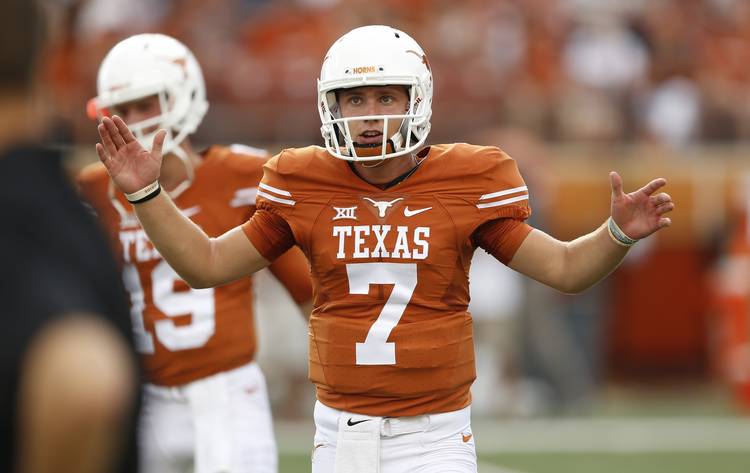 Texas quarterback Shane Buechele warms up prior to the game against Notre Dame at Royal-Memorial Stadium on Sunday September 4, 2016. JAY JANNER / AMERICAN-STATESMAN

The sight of Buechele, wearing a new No. 7 jersey instead of No. 16, running onto the field electrified the capacity crowd on hand at Royal-Memorial Stadium. He came into the game with 12:28 remaining in the first quarter after the Irish took a 7-0 lead.

Texas coach Charlie Strong refused to name a starter at last Monday’s press conference. But he’s done nothing to stop the hype surrounding the righthander from Arlington Lamar. Strong has likened Buechele a “gym rat,” someone who once called the coach after hours and badgered him to let players into the practice facility.

His father, Steve, is a bench coach for the Texas Rangers. Steve Buechele was given the day off to come watch his son play even though the Rangers are finishing up an AL West series against rival Houston.

Less than an hour until kickoff, here’s the weather report from DKR

Did someone throw a program at Notre Dame RB Tarean Folston ?