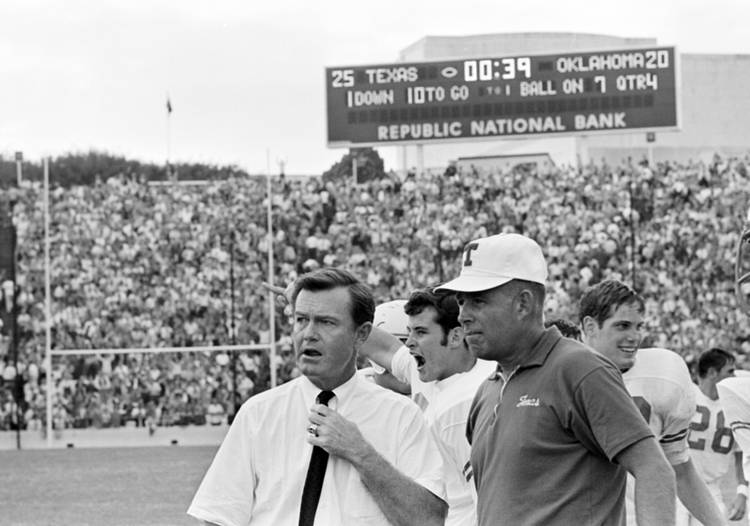 University of Texas head coach Darrell Royal, left, holds back any feeling about his Longhorns scoring a touchdown with 39 seconds to go against the University of Oklahoma in Dallas, Oct. 12, 1968. Appearing equally grim is Texas assistant coach RM Patterson, right. (AP Photo)

Historically speaking, Texas is no underdog.

In that respect, being ranked No. 11 in the Associated Press Top 25 should feel familiar. So why does the Longhorns’ giant leap into the poll feel like uncharted territory?

It could be because, for Texas, such a move is extremely rare. In the past 20 years, an unranked Longhorns team has beaten a top-10 opponent just twice.

And the last time Texas jumped from unranked to as high as No. 11? That would be never.

RELATED COVERAGE: Texas appeared on every AP ballot, as high as No. 2

The last time it jumped straight into the top 15, the man whose name now graces the school’s stadium was in his first season as its coach.

Here are five times the Longhorns went from unranked to the top 25:

In a season to forget, Texas gave its fans a game to remember during Nebraska’s last season in the Big 12.

The Longhorns dropped out of the top 25 for the first time in more than a decade after back-to-back losses to UCLA and Oklahoma. Mack Brown’s bunch responded by marching into Lincoln and punching the No. 5-ranked Cornhuskers in the mouth.

The Longhorns jumped to No. 19 after the 20-13 victory, then stumbled the next week at home against Iowa State on their way to a 5-7 finish. However, bragging rights over Nebraska are still intact.

The Longhorns came into the 1996 season as a top-10 team — fresh off a 10-2-1 season with the promise of sophomore Ricky Williams at running back. Things did not go according to plan.

By November, they were 3-4 and had fallen out of the polls completely. Four-straight victories to end the regular season were enough to clinch the Big 12 South and earn a trip to the Big 12 Championship, but not a top 25 ranking.

Few gave Texas a chance against No. 3 Nebraska and a Big Red-backing crowd in St. Louis, but they pulled the upset, 37-27, and went to the Fiesta Bowl ranked No. 20.

After back-to-back losing seasons under David McWilliams to end the ’80s, unranked Texas beat Penn State at Happy Valley to move to No. 22. Then they fell the following week at home to No. 20 Colorado and dropped out of the poll.

Two weeks later, the Longhorns scored late to beat No. 4 Oklahoma and move to No. 19. Texas finished the campaign 10-2, with the second loss coming to Miami in the Cotton Bowl.

(Skip ahead to the 53:40 mark to watch Peter Gardere’s game-winning touchdown pass to Keith Cash.)

Like the 1996 team, Darrell Royal’s squad of ’68 came in with high expectations and floundered to open the season. A tie against No. 11 Houston at home preceded a loss at Texas Tech the following week to drop preseason No. 5 Texas all the way out of the polls.

The Longhorns went to Dallas 1-1-1, and jumped all the way to No. 17 after beating Oklahoma 26-20. They won nine straight, closing with a win over Tennessee in the Cotton Bowl, to finish the season at No. 3.

RELATED COVERAGE: Texas returns to AP poll for the first time since 2013

Here we are, and you probably know the story. Texas went 1-9 in 1956, losing all six in the Southwest Conference. Out went Ed Price and in came Royal, and the rest is history.

It all started with a 26-7 win over Georgia in Atlanta, which vaulted the unranked Longhorns all the way to No. 13.

Let’s hope the similarities end there in 2016. the 1957 team finished 6-4-1, although it did beat ranked opponents in Arkansas, Rice, TCU and Texas A&M before finishing 11th in the AP poll after a loss to Mississippi in the Sugar Bowl.