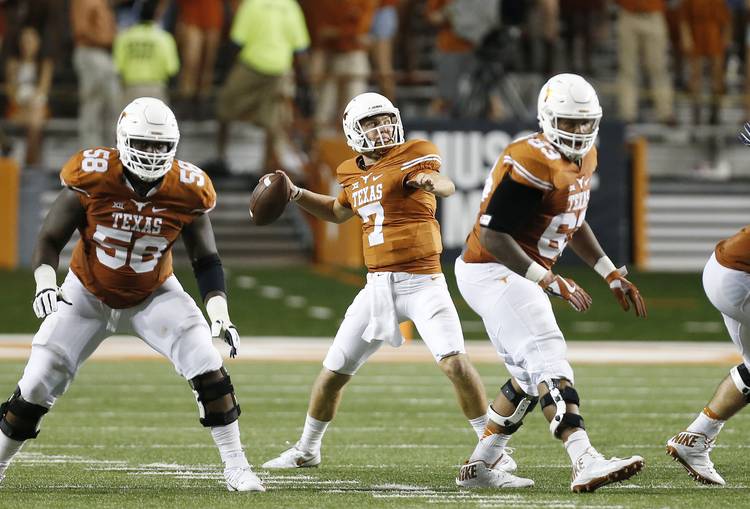 Texas quarterback Shane Buechele passes against UTEP during the second half at Royal-Memorial Stadium, Saturday, Sept. 10, 2016. (Stephen Spillman / for American-Statesman)

On Texas’ second series, Shane Buechele found wide receiver Jerrod Heard in the end zone for a 29-yard touchdown, his first ever as a wide receiver and it came on his 21st birthday. He added a second touchdown in the fourth quarter. Kind of the icing on the cake.

Late in the first quarter, freshman Brandon Jones made his first big impact play, coming up the middle and blocking a UTEP punt at the 6-yard line. It led to a Texas field goal.

Speaking of Jones’ block, Texas blew a fortuitous opportunity late in the first quarter the block set up the Longhorns at the Miners’ 6. But the 18-Wheeler package stalled, and Texas settled for a 22-yard field goal.

Poona Ford took a bow after a third-quarter sack, and the Texas defensive tackle got flagged for unsportsmanlike conduct.

Executing the two-minute offense to perfection, Buechele connected with Jacorey Warrick on a perfectly thrown fade route just in the corner of the end zone for a 20-7 lead in the second quarter.

Free safety DeShon Elliott, blitzing from the left side, raced in and tackled quarterback Kavika Johnson, pushing the Miners back in their own end of the field and forcing a punt that Texas would turn into a touchdown late in the first half.