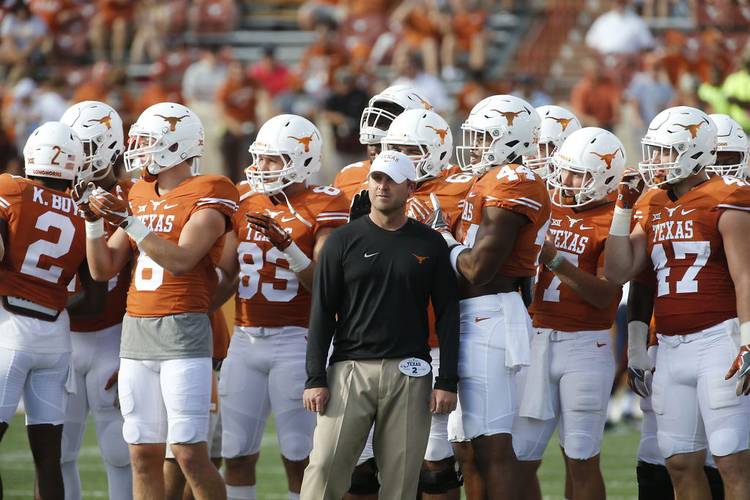 Sterlin Gilbert stand on the sidelines and watches the team during pregame warmups before the Longhorn's game against UTEP Saturday September 10, 2016 in Austin. Rodolfo Gonzalez/AMERICAN-STATESMAN

Texas marched right now the field on its first offensive possession, and appeared to take the lead when Shane Buechele hit Jacorey Warrick for an 11-pass along the left sideline.

The referees initially ruled the play a touchdown, but replays showed the ball came loose before he crossed the goal line. UTEP took over at its own 20-yard line after the touchback.

Touchdown Texas. Quick pass out to Warrick. He fumbles in the end zone, but the plane seems broken. Will be reviewed.

Jacorey Warrick scores on an 11-yard TD catch, but the ball popped out near the goal line. TD or touchback? The zebras will review. #HookEm

Jacorey Warrick has been great in the first part of the season but he didn't get that coveted first touchdown. Nice play to cause the fumble

Fumble or touchdown? You be the judge.

And the @UTEPFB defense HOLDS! 👊 Miners force a Texas fumble at the goal line for a touchback! pic.twitter.com/Y339pImMsi