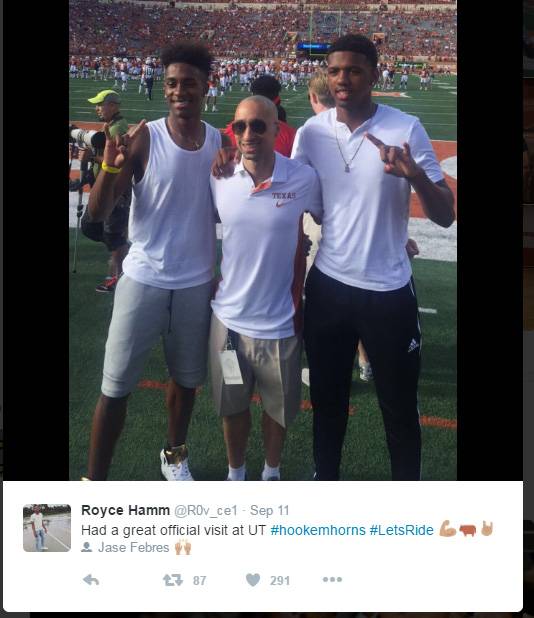 Texas basketball may have benefited from a little extra buzz on campus this past weekend. While the No. 11-ranked football team hosted UTEP, the men’s basketball team had talented uncommitted recruiting targets, as well as committed forward Royce Hamm, on campus taking in the atmosphere.

On Sunday, Hammonds tweeted this:

My dream just got a little more vivid 💯

The 6-foot-7, 190-pound forward has already cut his list to nine teams, which includes Texas, Connecticut, Alabama, Western Kentucky, Georgia State, Georgia Tech, Miami and Memphis. Currently 247 Sports predicts Alabama to be the favorite in landing Hammonds. He will reportedly take an official visit to Memphis on Sept. 23, then its to Miami on Oct. 7, Alabama on Oct. 21 (the Tide play Texas A&M the following day in football) and he’ll visit Connecticut on Nov. 4 (the Huskies’ season opening basketball game in on Nov. 5).

Febres is projected to be a Houston Cougar according to 247 Sports, but it appears he had fun with Hamm and coach Shaka Smart at the football game:

Febres is a 6-foot-5-inch shooting guard and the No. 6-ranked player in Texas according to 247 Sports. He named his top 5 schools last month, which includes Texas, Baylor, Houston, Texas A&M and Stanford. Houston got the first crack at an official visit on Sept. 3. Febres will be in Palo Alto at Stanford this weekend then Waco on Sept. 24.

Texas’ 2017 recruiting class is already off to a good start as Hamm, from Aldine Davis High School, and Minneapolis product Jericho Sims (a 6-foot-8-inch power forward) committed over the summer.  It’s very early in the process, but Texas’ two four-star commitments gives them the early lead as far as Big 12 class rankings go.

Texas’ highest-rated target is Bellaire Victory Prep product Jarred Vanderbilt. The five-star 6-foot-8-inch small forward is at 12 percent Texas in 247 Sports’ Crystal Ball rankings, but is lagging behind TCU (62 percent) and Kentucky (19 percent). Vanderbilt named Texas one of his nine finalists in July and visited with him on Sunday, a day before Kentucky’s scheduled in-home visit.

Iowa State (three commitments), TCU (two) and Oklahoma (2) follow. Reigning Big 12 champion Kansas landed four-star Dallas guard Marcus Garrett in August, and lost to Arizona on the No. 1 player in the class (DeAndre Ayton), but still will host three five-star recruits between now and the end of the month. Kansas is reported to have an in-home visit scheduled with Vanderbilt on Sept. 21.

Golden: Charlie Strong gets even Saturday night versus Cal