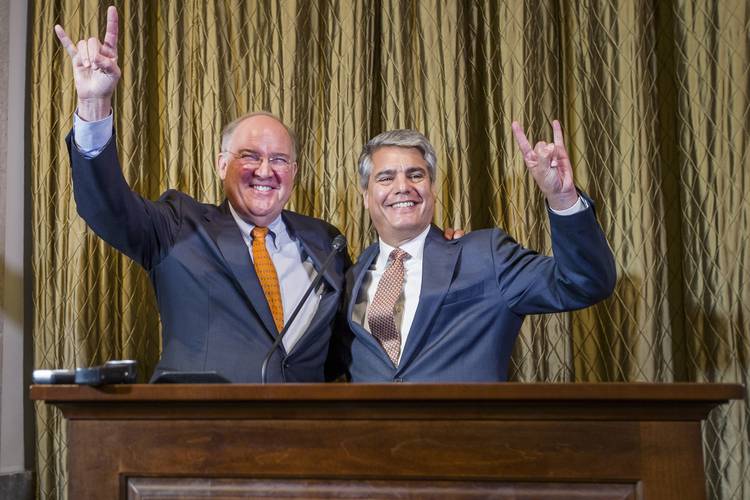 USE THIS PHOTO Interim athletic director Michael Perrin and University of Texas President Gregory Fenves sign the "hook em" during a press conference, Wednesday, Sept. 16, 2015, announcing Steve Patterson's replacement after his departure the day before, at the University of Texas, in Austin, Texas.(RICARDO B. BRAZZIELL / AMERICAN-STATESMAN)

It’s been a full year since Texas fired athletics director Steve Patterson and Mike Perrin stepped in as his interim replacement.

Perrin had his interim tag removed in December, and since then it’s been full speed ahead for the UT athletics department. A lot has transpired since Perrin took over, but here are five moments that stand out from his first year.

A former linebacker under Darrell Royal in the 1960s, Perrin inherited the athletic program during a down period for its flagship football program. The 24-14 win over Oklahoma signaled that things might be all right after all under head coach Charlie Strong.

The Longhorns arrived in Dallas 1-4 to start Strong’s second season, but for three-plus hours, the frustrations of the season were forgotten.

After a long negotiation process, Perrin helped push Texas’ 15-year, $250 million apparel contract with Nike over the goal line. It was the richest shoe and apparel deal in college sports and continued an arrangement with Nike that began in 2000.

Texas volleyball has been on top before, and in 2015 it almost claimed its second national championship in four years. The Longhorns put up a good fight against Nebraska, which was playing a virtual home match in front of 17,561 fans at the CenturyLink Center in Omaha.

The Cornhuskers ended up winning 23-25, 23-25, 21-25 in what was a painful loss at the end of a successful season. Texas finished 30-3 and was the No. 3 seed in the NCAA Tournament. The Longhorns seniors went 113-13 in their four years, bringing the program to a better place than where they found it.

At a program like Texas, national championships are the standard. Perrin’s first as athletic director came courtesy of the men’s swimming and diving team, which dominated the field to claim its second-straight title in March.

With the championship, coach Eddie Reese claimed his 12th overall, the most ever by one coach. The Longhorns scored 541.5 points, outdistancing second-place California by 190.5 (wait, isn’t Texas playing Cal in something else soon?). Texas shattered the NCAA record in the 800-yard freestyle relay and freshman Townley Haas also broke the record in the 200 free.

Perrin has stuck beside Strong, who began his third season as Texas coach earlier this month. And what a start it was.

By beating No. 10-ranked Notre Dame 50-47 in double overtime, in front of the most-watched season opener in college football history, the Longhorns sent a message to the nation. There is still a lot of football to be played in 2016, but Perrin appears to be driving a “sound” ship into the future.