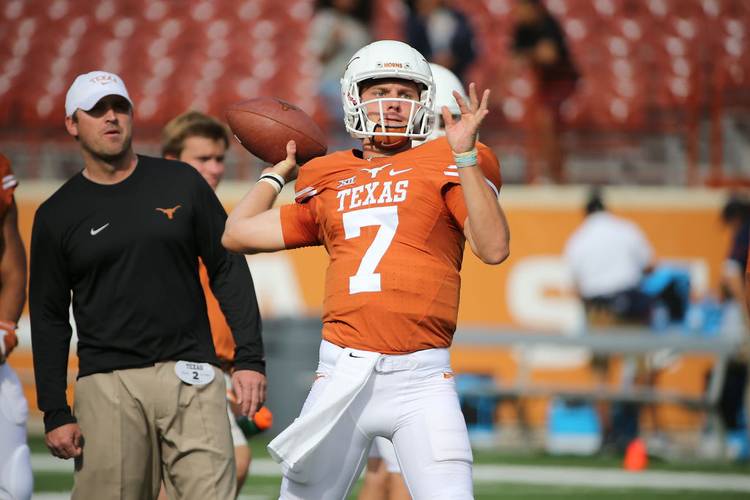 Shane Buechele #7 throws the ball during pregame warmups before the Longhorn's game against UTEP Saturday September 10, 2016 in Austin.DEborah Cannon/AMERICAN-STATESMAN

Two games into his Texas career, quarterback Shane Buechele is building quite the highlight reel.

He’s already thrown six touchdown passes, led the Longhorns to a pair of victories and shown off a deep ball that has fans excited about the future.

Perhaps most impressively, he’s not satisfied despite being named Big 12 Newcomer of the Week for the second-straight game.

Because we know you can’t get enough of this kid — and quite frankly, we can’t either — here’s a review of some of the best throws he’s made so far.

5. Seconds for the birthday boy

OK, so this one won’t rank high on the degree-of-difficulty meter, but watch the UTEP defense bite on Buechele’s pump fake. He sells the screen well, then delivers a perfectly-timed throw to a wide-open Jerrod Heard for the touchdown. It was the second touchdown catch for Heard on his 21st birthday.

4. Thanks for dropping in

We’ll get to the really deep passes, I promise. But one of the most impressive traits from Buechele so far has been his touch when throwing long. Whether he’s throwing to Heard — like he did for this 68-yard gain against Notre Dame — or other receivers like John Burt and Jacorey Warrick, he always seems to have the right weight on the throw.

Heard was able to catch this in stride and admitted he should have scored.

Buechele with a bomb to Heard. #Hookem pic.twitter.com/bKOkgEn5WY

After nearly hitting Burt for a long touchdown in the first half against the Fighting Irish, Buechele delivered another perfect pass for the sophomore speedster to run under at the start of the third quarter.

Watch how Buechele barely has his feet set as he sees Burt get separation on Notre Dame cornerback Chris Coleman. He basically threw the pass off his back foot — 50 yards in the air, right on the money.

Buechele with a bomb to Heard. #Hookem pic.twitter.com/bKOkgEn5WY

This is the throw that really got people talking during Saturday’s win over UTEP. Already off to a great start, Buechele delivered a beautiful 46-yard touchdown pass to Dorian Leonard — his third scoring throw of the game.

You could have put a homing device on that ball and it wouldn’t have hit Leonard in stride any better.

Touchdown Texas: Buechele does it again. This time to Dorian Leonard. #Hookem pic.twitter.com/B38PiZKfU8

Here are another couple of angles you may not have seen. Between Leonard’s speed and Buechele’s accuracy, those poor Miners didn’t have a chance.

You never forget your first, right? Armanti Foreman got a lot of the praise when his ridiculous catch against the Irish made the top play on SportsCenter. And rightfully so; it was an amazing play by the wide receiver.

Watch it a couple of times though, and you’ll realize Buechele’s first touchdown pass might have been the best of his career so far. To have the confidence to throw that pass during the first drive of his college career — against an extremely talented Notre Dame secondary, no less — is something truly special.

Yes, it took an incredible effort from Foreman to actually catch the pass, but the true freshman put trust in his wide receiver and placed the ball where only Foreman could get it.

BONUS: Maybe we should have seen this coming

Golden: Charlie Strong gets even Saturday night versus Cal