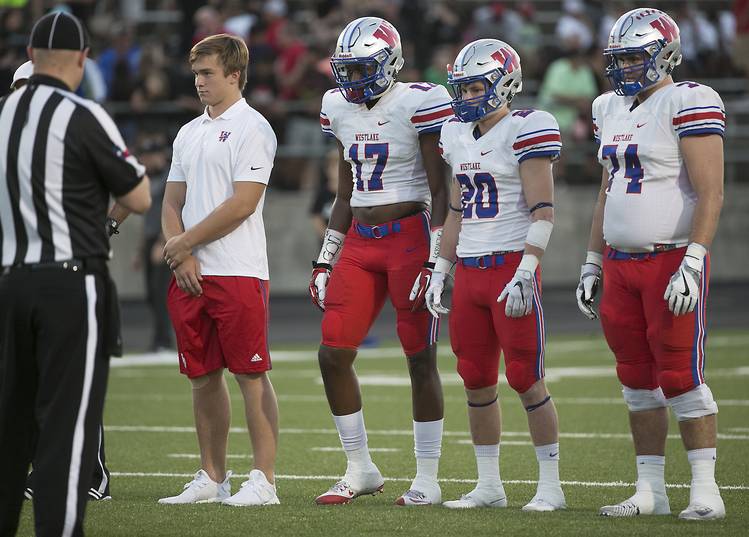 Captains for the Westlake team meet at midfield for the coin toss and they are from left, injured QB Sam Ehlinger, Levi Jones, Barrett Chambers and Joe Heironimus against Bowie in a non-district game at Burger Center Friday night September 16, 2016. RALPH BARRERA/AMERICAN-STATESMAN

Texas football fans are surely interested in present state of affairs on the 40 Acres, but an eye should also be kept on who the team is recruiting.

Texas’ 2017 recruiting class has received eight verbal commitments. 247Sports currently ranks the Longhorns’ upcoming group of recruits as the nation’s 41st-best, while Texas checks in at No. 55 in the Rivals rankings.

Ehlinger spent a third straight week on the sideline, but Westlake still earned a 35-21 win over rival Bowie. Ehlinger told the American-Statesman on Friday that he will return from his knee injury for next week’s game against Vandegrift.

Nacogdoches improved to 3-1 with a 35-14 win over Hallsville on Friday. No stats were immediately available for Thompson.

Estell hauled in 54-yard touchdown catch, but Hughes Springs scored twice in the fourth quarter of a 14-13 win over the Hornets. Hooks’ three losses this fall have come by a combined six points.

DeSoto had a bye this week. The Eagles are 3-0 and ranked second in the Associated Press’ Class 6A poll.

Lake Dallas had a bye this week. The Falcons are 1-2 this season, and Boyce has registered 12 tackles.

Carson and the Leopards dropped a 31-26 decision to Atlanta on Friday. No stats were immediately available for Carson.

Miller was relatively quiet in the Lions’ first defeat of the season, a shoot-out loss to Rockwall. In that 59-58 thriller, Miller was limited to four catches and 47 receiving yards.

Cedar Ridge handed Temple a 28-14 loss on Friday. No stats were immediately available for Graham.