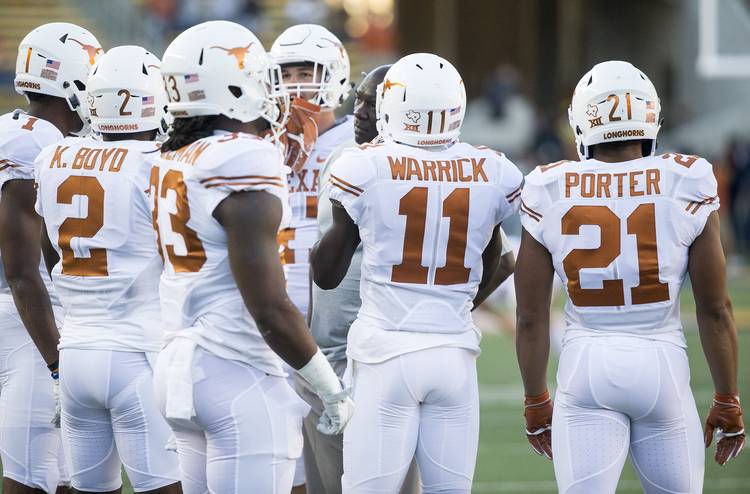 Texas Longhorns against Cal Golden Bears during the pre-game of a NCAA college football game, Saturday, September 17, 2016 at Memorial Stadium in Berkeley, California. RICARDO B. BRAZZIELL/AMERICAN-STATESMAN

No one is safe from the meme machine.

Someone snapped a photo of Texas senior linebacker Tim Cole making a face during Monday’s press conference and posted it on Twitter. Now his teammates are having some fun with it.

When you come home from college, to leftovers pic.twitter.com/n4XEUe6xRJ

When your friend ask you for a dollar and you say no then he call you broke. @Timbo_Cole30 pic.twitter.com/pwxhjI5IYC

When They Ask Which UT You Go To… pic.twitter.com/XmDmbZ4MO3

Boo: I just think it's funny

When the professor says attendance is mandatory. pic.twitter.com/KlGALqy9B0

… As did a couple current and former student managers.

When Chip asks you to turn in an old pair of socks to get a new pair…😂 pic.twitter.com/9ptXiMeZvF

Luckily for them, Cole is enjoying the jokes almost as much as everyone else.

Bro y'all got me rolling with these memes of me 😂😂😂

It appears all this was sparked from a fan’s tweet. He then tagged a few Longhorns, setting off a chain reaction. Well played.