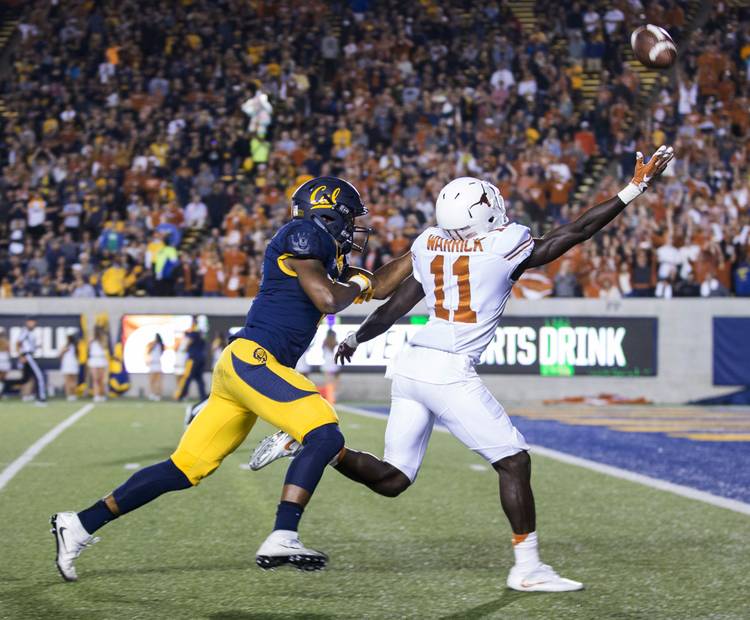 Texas Longhorns 11 Jacorey Warrick can't make the catch against Cal Golden Bears during the first half of a NCAA college football game, Saturday, September 17, 2016 at Memorial Stadium in Berkeley, California. RICARDO B. BRAZZIELL/AMERICAN-STATESMAN

There were a lot of reactions to be had after a wild Week 3 of college football, but a quick glance at the Associated Press Top 25 only tells half the story.

Texas dropped to No. 21, picking up 196 points after falling to unranked California, 50-43, early Sunday morning.

These are the same Longhorns that were only 18 points behind Louisville and a spot in the top 10 a week ago.

The results happened – Texas lost, Louisville rocked previous No. 2 Florida State, the rest of a crazy Saturday played out – and the voters reacted.

Here’s how votes for Texas broke down, according to collegepolltracker.com.

We’ll start with the voters who kept the Longhorns the highest, essentially keeping them in the top 25.

Marc Weiszer from the Athens Banner-Herald in Georgia had Texas at No. 16, the highest of all the voters. He still dropped the Longhorns eight spots from the previous week’s ballot, but he’s not giving up hope just yet.

The same can be said for Dana Sulonen (Opelika-Auburn News), Garry Smits (Florida Times-Union), Mandy Mitchell (WRAL-TV5, Raleigh) and Tom Murphy (Arkansas Democrat-Gazette). All four had Texas at No. 17, dropping six or seven spots from Week 3.

On the other side are voters who were high on Texas just a week ago before dropping the Longhorns off their ballots completely.

Following the Longhorns’ loss in Berkeley, neither included Texas on this week’s ballots.

The same can be said of Tony Parks (1280 AM/97.5 FM KZNS, Salt Lake City), Josh Kendall (The State, Columbia, S.C.), Michael Lev (Orange County Register) and the Austin American-Statesman’s own Kirk Bohls, all of whom had the Longhorns in their top 10 prior Saturday but left them off afterward.