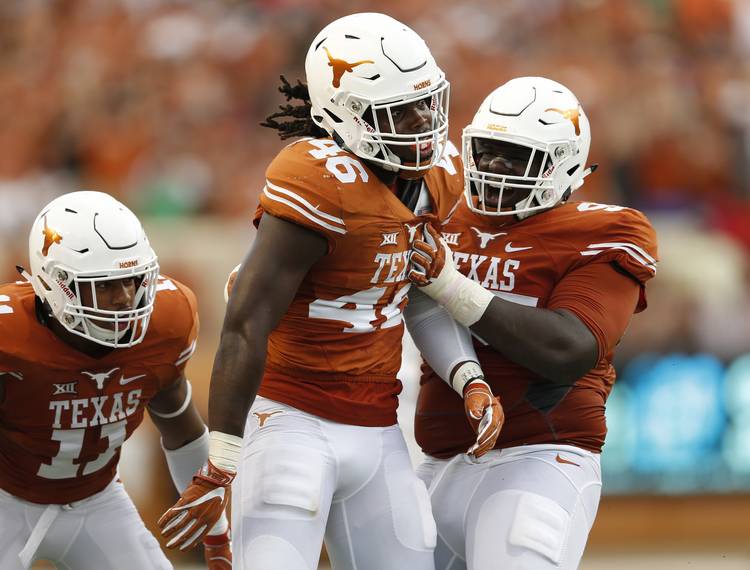 The future is bright for the Texas defense, at least according to CBS Sports.

The network’s NFLDraftScout.com recently put out a list of prospects by position for the 2019 NFL Draft, and there were several Longhorns included — most of them on the defensive side of the ball.

Click the player names below to find the full position rankings.

It should come as no surprise that sophomore linebacker Malik Jefferson leads the group, ranking as the No. 1 outside linebacker prospect in the class. Jefferson is no stranger to being at the top of lists, as he was the top linebacker in the country and the No. 1 prospect in Texas coming out of Mesquite Poteet, according to 247Sports.com.

At cornerback, Texas has a trio of sophomores in the top 20 of their class. Holton Hill leads the group at No. 10, followed by Davante Davis at No. 15 and Kris Boyd at No. 18. Despite the recent struggles at that position, seeing three names on a list of NFL prospects is an eye opener to the amount of talent present.

The same can be said at safety, where DeShon Elliott is ranked No. 12 among sophomores at strong safety, and P.J. Locke III is No. 20 at free safety.

RELATED COVERAGE: Sheroid Evans on Texas defense: ‘We just need to bounce back’

On the other side of the ball, a pair of offensive linemen show great promise. Guards Patrick Vahe (No. 13) and Connor Williams (No. 19) are both in the top 20. Out wide, John Burt‘s blazing speed has him ranked as the No. 18 sophomore wide receiver prospect.

Punter Michael Dickson also got some love. The Australian has been on fire so far this season, and it earned him the No. 13 spot among punters.

The 2019 NFL Draft is still a long way off, which means all of these talented players have plenty of time to reach their potential while still on the 40 Acres. The future is bright indeed.