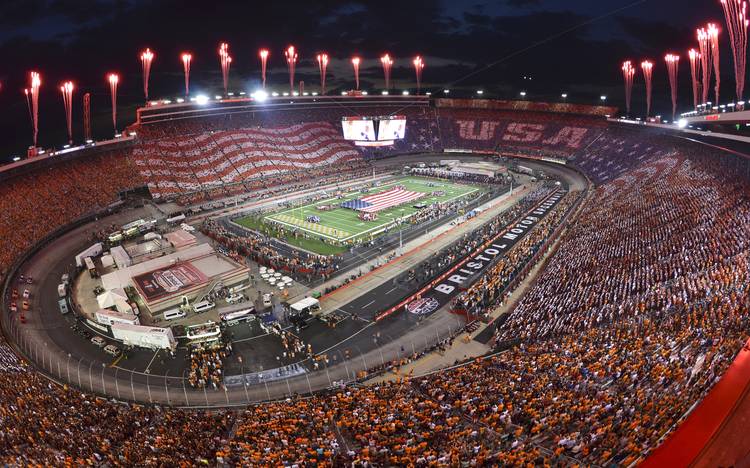 A general view of Bristol Motor Speedway during the national anthem of the game between the Virginia Tech Hokies and the Tennessee Volunteers on September 10, 2016 in Bristol, Tennessee. (Michael Shroyer/Getty Images)

What would it take to revive the Texas-Texas A&M rivalry?

The question has been pondered ever since the Aggies bolted for the SEC, and it seemingly gets brought up every couple of weeks. Unfortunately, none of the suggested ideas for bringing the game back have gained much traction.

RELATED COVERAGE: Bohls: At least Texas and Texas A&M are talking to each other about playing again

On Thursday, Texas Motor Speedway president Eddie Gossage suggested during an interview with SECCountry.com that he may have a solution.

Earlier this season, Tennessee and Virginia Tech broke the all-time football attendance record when they played in front of 156,990 fans at Bristol Motor Speedway. Gossage believes the incentive of breaking that record — and the massive payday that would result — might be enough to entice the Longhorns and Aggies to come to Fort Worth.

“I think everybody that lives in Texas would love to see them play again. It’s a crime they don’t,” Gossage told SEC Country’s Kyle Tucker. “That would be a perfect game for us, because that’s a special one. That was one you always looked forward to. Maybe to revive it, something like this would help.”

Unfortunately, the size of Texas Motor Speedway may actually work against Gossage.

Check out this response to the idea on Twitter. That football field looks awfully tiny.

Football at Texas MS is a bad idea. While The Big House fits inside Bristol, Bristol fits inside TMS. Comfortably. pic.twitter.com/kxk2m4qCmn