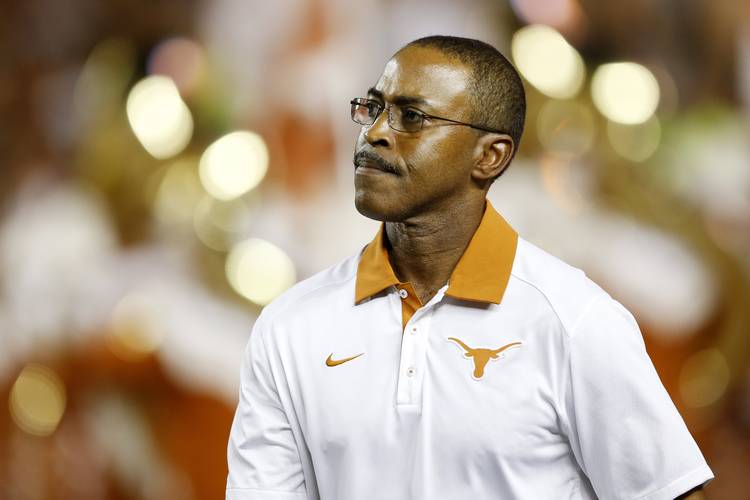 Texas’ defensive play has been under the microscope since the 50-43 loss to California. Normally,  players, coaches, fans and reporters would be well on to the next opponent by now. But the Longhorns were off last Saturday and had an extra week to think about it. Or stew, depending on your vantage point.

Starting Saturday, No. 22 Texas begins the nine-week gantlet that is Big 12 play. UT opens conference action at Oklahoma State at 11 a.m. Based on the tone of this week’s mailbag, it’s safe to assume everyone is looking for defensive improvement.

Q. Bedford is a helluva recruiter and understands these kids. He connects well with them. I don’t think we should get rid of him but maybe assign him as a position coach and let (Sterlin) Gilbert completely run the offense and have Strong take over defensive play calling until we can hire a top 10 defensive coordinator. We got this! Big 12 championship this year and next year…playoffs here we come! Have faith Horns!

DAVIS: Outright firing a coach midseason leaves the rest of the staff short-handed for the rest of the year. The NCAA allows for only 10 on-field coaches (head coach, nine assistants). If Strong simply pushed Bedford out the door, the Longhorns would be down a man in an area where everyone should be pitching in at the moment. “Right now, you’re three games into it, and I just didn’t see at this point how that would help us,” Strong said Monday. “I just thought more than anything, it would hurt us.” Bedford knows the defense must improve. It’s not like he suddenly forgot the importance of defense. Strong and Bedford were together in 2008 when Florida won the national title, and they were together in 2013 when Louisville had the No. 1 defense in the nation. They’re in this through thick and thin. If the shoddy play and losses continue, Strong will be held ultimately responsible, not Bedford.

Q. I do not blame it on the coaches. The players have got to play with the old Horn strut!!! Meaning, we are not gonna give you anything, you have to come in and play and take it! A tenacious defense was what the Horns had in the old days. You smack us in the mouth and we will repay you with very STRONG dividends in return!! Hook’em Horns!!

DAVIS: I do think the players must take some responsibility, and they certainly did. For example, anybody seen Malik Jefferson the last few games? Naashon Hughes? Charles Omenihu? Davante Davis, Kris Boyd, Holton Hill? I’m not trying to call anyone out, but these are players thought to be the leaders and standouts on the defense. They’ve got to start playing like it. It’s no coincidence that Jefferson has been absent at the last few Monday press conferences.

Q: I’m just tired of watching my team get embarrassed on national television to inferior talent. And why does it seem every time Texas plays a big opponent, either the players aren’t motivated or we were out coached? I’m not talking about the last few years. I’m talking about the Mackovic era, the first five years of the Mack Brown era, and the last three years of the Strong era.

DAVIS: Going back to the Mackovic and Brown years seems like going back too far. Let’s stick to the here and now. Even Strong’s biggest supporters have to acknowledge Texas has been blown out too many times the last two seasons. Under Strong, the Longhorns have lost eight games by 21 points or more and four by 34 points or more. TCU posted a 38-point win in 2014 and a 43-point rout in 2015. It’s not necessarily the losses that has fans worked up. It’s the routs. That must stop this season in conference play.

Q. Charlie has never faced passing attacks like he faces at Texas. He grew his teeth on $EC pedestrian offenses at Florida and whatever ND faced while Holtz was there. Then he faced Tier II offensive talent at Louisville for a few years. He needs Greg Robinson to show him the way.

DAVIS: I’m not sure any top-notch defensive coordinator faced the type of high-flying offenses you see on a weekly basis in the Big 12. You definitely didn’t have that during Strong’s days in the SEC. That’s a ground-and-pound league. And yes, winning the Big East title wasn’t as big as, oh, say winning the SEC or Big 12. But Strong doesn’t strike me as the type of guy who will just give Robinson a call and ask him to pitch in like Mack Brown once did. That’d be a bridge too far.

Q. Brian Davis is a scum bag. One loss on a young team and now he thinks the team is garbage.

DAVIS: Whoa, how’d that get in here? Hey, when the team is 2-0, people send emails saying they like the coverage. Lose a few games — or even one — and they’ll say the stories are dreck. No, I do not think this team is “garbage” as Stephen lets loose in his hot take. But that was an extremely winnable game at Cal that Texas lost because of the same defensive issues that’s been around for two years running.

Q. Where is Mack Brown when we need him!!

DAVIS: Believe it or not, I saw him the week after the Cal game over on campus. He looked rested and refreshed. TV work does wonders for lowering a coach’s stress levels.

Q. Kent Perkins did what millions of people do on a daily basis. Get over your self-righteous selves. As long as he rights his wrong and understands the seriousness of his actions, takes his punishment and makes better choices from here on out, then good on him, and let him move forward.

DAVIS: Perkins struck all the right notes during his press conference on Monday. He expressed remorse, said he was thankful nobody got hurt and as for being in handcuffs, “I was terrified.” Safe to say Perkins learned a pretty good lesson. Does that make it right? Absolutely not. But let’s not pretend this doesn’t happen every day in Anytown, U.S.A. Perkins, 21, has a right to go out and have a good time. If anything, it’s a lesson to other teammates that they all need to watch out for each other while in the locker room, on campus and, yes, down on Sixth Street or wherever they may be.

Q. They know better. Off the team. Sorry just the way I feel.

DAVIS: Ruth, you are definitely not the only one who feels this way. I saw plenty of folks who believed Perkins should have been outright dismissed. I give Strong credit for properly weighing the punishment against the crime. Perkins is a team captain and someone who, by all indications, has been a model citizen at UT. He deserves a second chance. All that said, his initial court appearance is scheduled for Oct. 7.

Q. He made a mistake, a big one. Thank goodness nobody got hurt by his stupid decision. But he is young, and worthy of redemption and change.

DAVIS: Agreed. Perkins will be suspended against Oklahoma State and will have to do some community service. Chances are he’ll be in the Pit with strength coach Pat Moorer for some extracurricular work, too.

Q. Shane Buechele is the best pocket passing quarterback in college football. I just hope he stays healthy and sticks around his full four years.

DAVIS: Buechele has certainly played like a veteran in the first three games. I’m still curious about his injury status, though. Buechele said the supposed rib injury suffered against Cal was not an issue at all. He brushed off questions about the injury two weeks ago and then did the same again on Monday. I’ll be looking to see if he’s got any sort of extra padding on against Oklahoma State. But the simple fact he returned against the Golden Bears and played as well as he did makes me think Buechele is OK.

CBS: 12 Texas sophomores near top at their positions for 2019 NFL Draft