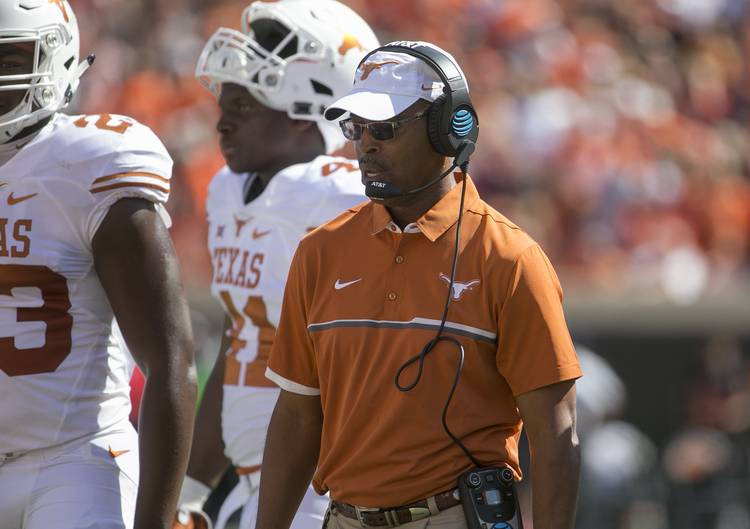 Texas coach Charlie Strong will assume full play-calling and control of the defense for the rest of the season, a source familiar with the situation confirmed to the American-Statesman.

Defensive coordinator Vance Bedford is expected to remain on the staff. However, this move will be perceived as a demotion just one week after Strong said changing coordinators “would hurt us.”

Bedford did not respond to questions from the American-Statesman. He typically does not speak to reporters until Wednesdays of game week; however, that is now uncertain going forward. Orangebloods and 247Sports first reported late Sunday that Bedford would be relieved of his play-calling duties.

Strong is scheduled to meet reporters at his weekly press conference at 11 a.m. Monday.

With two weeks to prepare for Oklahoma State, the Texas defense looked overmatched moments after kickoff on Saturday.

Multiple missed tackles helped the Cowboys take an early 14-0 lead en route to a 49-31 win. OSU had 555 total yards as Texas suffered its 10th loss of 18 points or more in three years under Strong.

“One of the problems we’re facing is we’re not believing in what we do,” linebacker Malik Jefferson said afterward. “I’m not saying we don’t believe in each other as a team. We go out there and have a lack of confidence when we play games.”

The defense has only one takeaway in four games, which ranks 127th nationally. Toledo is the only FBS team without a defensive turnover yet.

Strong admitted he called some defensive plays against OSU, and the Horns inserted four new players into the starting lineup. Nothing really worked. The frustrations were obvious. At one point, ABC cameras caught Strong yelling into his headset, then immediately showed Bedford listening briefly and taking his off.

“There’s no magical answer,” Bedford said after the OSU game. “We just gotta go out and play. I’ve got to do a better job of putting guys in position to play.”

Strong and Bedford are close friends who helped Florida win the 2008 national title. Bedford joined Strong in Louisville in 2010 and the two have been together since. Under their guidance, the Cardinals became the No. 1 defense in the nation in 2013.

When Strong came to Texas prior to the 2014 season, Bedford was a natural choice as defensive coordinator. The hard-charging Beaumont native was the Longhorns’ team captain in 1980 and still wears his burnt-orange heart on his sleeve. “Why would you not want to come to Texas?,” Bedford said numerous times the last two years.

In 2014, the defense held its own with future NFL standouts Jordan Hicks, Quandre Diggs and Malcom Brown. But last season, the unit fell apart completely and allowed 30.3 points and 452.6 yards per game. The 2015 defense is widely considered one of the worst in school history.

Bedford and his defensive assistants had the entire offseason to figure things out. Texas even signed another top-10 recruiting class with six defensive linemen and one of the nation’s top safeties. But in four games, Texas is allowing 38.3 points, putting the defense on pace to obliterate the school record for most points allowed in a season.

By taking over the defense, Strong has essentially demoted or lost his eighth assistant coach in three years. Linebackers coach Brian Jean-Mary becomes the only assistant from Strong’s original staff that has seen no change in his duties.

Strong took offensive play-calling duties away from Shawn Watson after the 2015 season opener and promoted receivers coach Jay Norvell. Strong hired Sterlin Gilbert to lead the offense prior to this season as Texas went in an entirely new direction with a spread offense similar to one used by former Baylor coach Art Briles.

Strong has changed offensive coordinators. Now he’s changing defensive leadership, and the special teams continue to be mediocre at best.

Overall, Strong is 13-16 in three seasons heading into this week’s game against No. 20 Oklahoma. He has two years remaining on a guaranteed contract worth more than $5 million annually.

No. 5 Texas golf in fifth place at Nike Collegiate Invitational