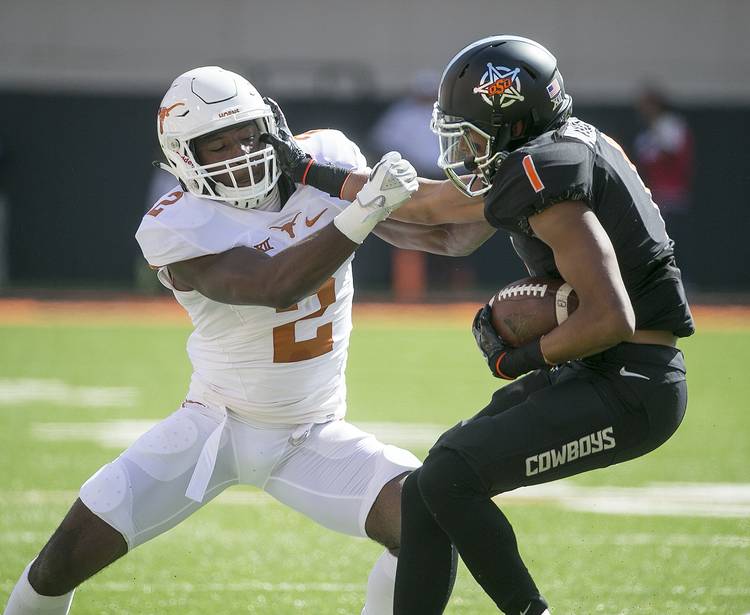 Texas's Kris Boyd gets some hand to his helmet by OSU's Jalen McCleskey during the second quarter at Boone Pickens Stadium in Stillwater, Okla., on Saturday, October 1, 2016. Texas lost to OSU 49-31. DEBORAH CANNON / AMERICAN STATESMAN

Everyone seems to have an opinion on Texas coach Charlie Strong and how to fix the Longhorns defense.

Outside voices got even stronger after Texas lost over the weekend at Oklahoma State, with national media talking about the possibility of Strong being fired. Even locally, the voices have gotten more powerful.

With so much noise, the rumors have certainly reached players and recruits — especially through social media.

Here are some things current players have been saying on Twitter since Saturday:

Sitting here and watching espn, I just wanna say sumn. I'll ride with coach Strong and any other coach on this staff. #BeatOU #HookEm

It has to come from within….

Recruits may be paying even closer attention. A pair of Texas commits, 3-star cornerbacks Kobe Boyce and Josh Thompson, have been quite vocal on Twitter the past few days:

i'll definitely be at the texas/ou game

i hope these rumors aren't true😤🤐

Coach Strong Is The 🐐❗️

Red River Rivalry to be broadcast in virtual reality