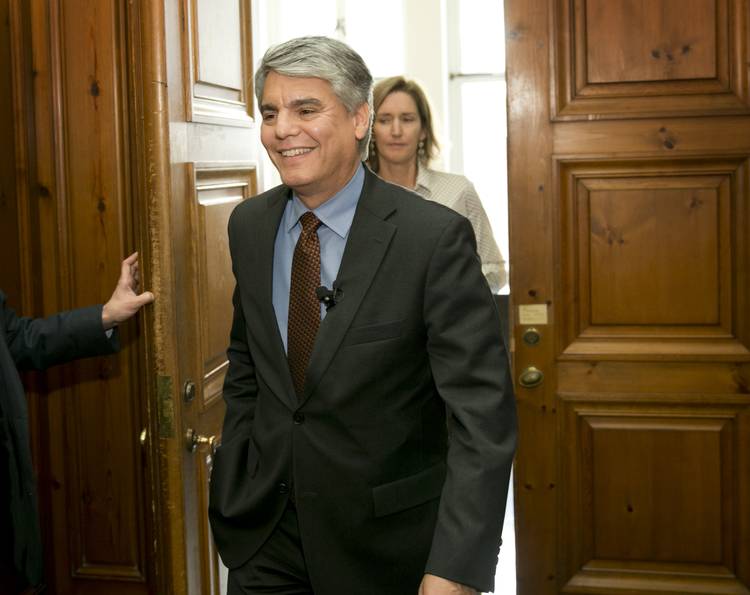 UT President Gregory L. Fenves arrives at a news conference in the Main Building on Wednesday February 17, 2016, where he announced the rules for carrying concealed handguns on campus. JAY JANNER / AMERICAN-STATESMAN

Texas President Gregory L. Fenves, one of coach Charlie Strong’s biggest allies, tweeted a message of support Wednesday for the football program and its leader.

“Had a great call (with) Coach Strong. We’re behind our student-athletes and coaches as they prepare for OU and rest of the season @Longhorn_FB,” Fenves tweeted.

A UT spokesman said the president would have no other comment on Wednesday.

Had a great call w/ Coach Strong. We’re behind our student-athletes and coaches as they prepare for OU and rest of the season @Longhorn_FB

In the wake of Fenves' tweet, a university source confirms Texas coach Charlie Strong will not be fired midseason no matter what happens.

At the University of Texas, the school president ultimately decides when to fire and hire football coaches. Former UT President Bill Powers made the final decision to fire Mack Brown after the 2013 season. Powers also supported hiring Strong even though then-athletic director Steve Patterson did all the legwork.

Fenves, an engineer by trade, is not one to make rash decisions. Considering there are eight games remaining in the 2016 season, he’d likely dismiss anyone who would seriously suggest a coaching change at this point.

In June, Fenves told the American-Statesman that he saw Strong’s back-to-back, top-10 recruiting classes as a sign of progress.

“I get asked this question: How many wins are needed? I’m not going to answer that,” Fenves told the Statesman.

“This last season, it could have gone very differently. Some bad breaks. That’s sports,” Fenves added at the time. “But I think Charlie is methodically building a team with his great recruitments and with his coaches. That alone, I see as progress. Now, fans want them to perform on the field. Charlie wants them to perform on the field. So we’ll assess that when the season’s over.”