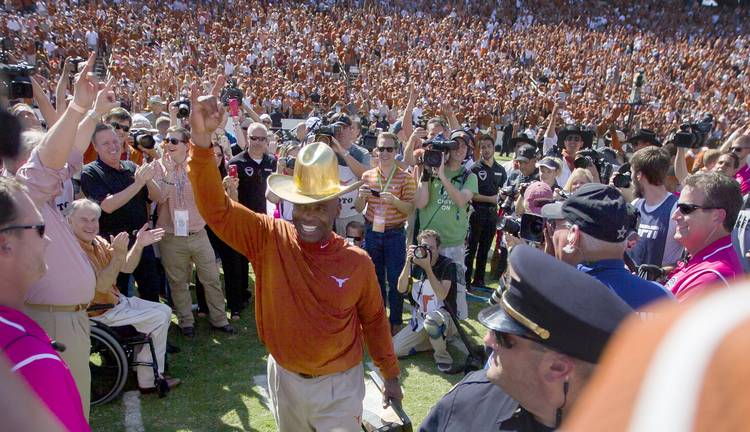 Texas coach Charlie Strong is playing up his team’s underdog status as the Longhorns prepare to face Oklahoma this weekend in Dallas.

Texas finds itself in a similar position to where it was last year — coming off disappointing performances as it prepares to face its biggest rival. The result in 2015 was a cathartic 24-17 win over the Sooners, and while it may have felt like an anomaly given the circumstances, history proves otherwise.

Let’s break down those victories, starting with recent history and working our way back.

No one gave the Longhorns a chance in this game.

Texas was reeling after starting 1-4, and it was fresh off of an embarrassing 50-7 loss to TCU the week prior. Rumors were starting to swirl about Strong’s future as coach.

(Sound familiar? Comparatively, 2016 has been roses.)

Despite being 17-point underdogs, the Longhorns came out and played their best game under Strong. They jumped out to a 14-0 lead and never blinked in the second half when the No. 10-ranked Sooners attempted to rally. Jerrod Heard’s first-down run to seal the victory brought to an end one of the most frustrating months in program history and bought Strong the offseason.

Oklahoma won the rest of its games to get into the College Football Playoff, making the win even more impressive.

Texas hadn’t beaten — or even led — Oklahoma in four years when the two met in what would be Mack Brown’s last Red River Rivalry game. The Longhorns changed that on the very first drive and never trailed on the way to a 36-20 win.

It was the only time under Mack Brown that an unranked Texas team faced a ranked Sooners outfit.

The next fall, the Sooners were ranked No. 4 and had Texas down to its last play facing fourth-and-7 with 2:05 left. Again, Gardere came through in the clutch, delivering a 16-yard touchdown pass to Keith Cash for the 14-13 upset win. An ugly game ensued in 1991, with Texas prevailing 10-7 over the No. 6-ranked Sooners on a 30-yard scoop-and-score by Bubba Jacques.

And in 1992, “Peter the Great” finished off his perfect record against Oklahoma with a 34-24 win. He remains the only quarterback in the rivalry’s history to accomplish that feat.

Texas will roll into Dallas this weekend with another freshman quarterback. Could Shane Buechele start his own Gardere-like streak by knocking off the No. 20-ranked Sooners? It’s a tall task, but history says it can be done.