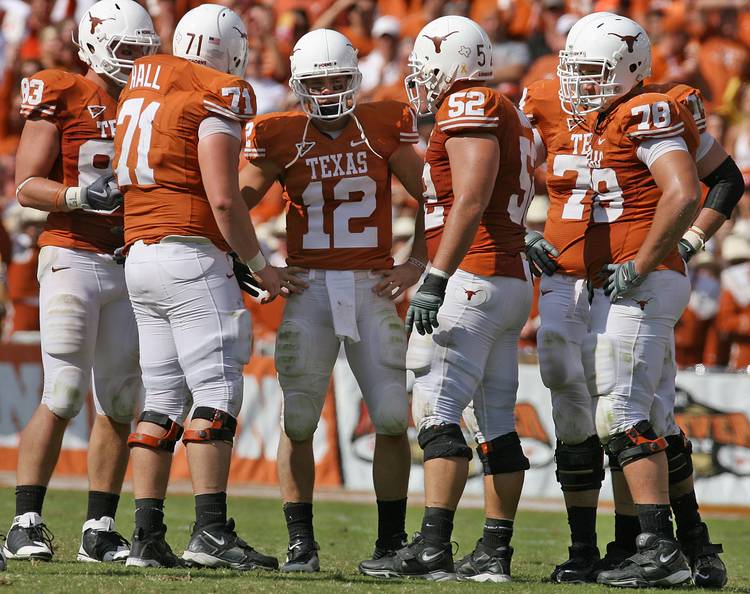 On Monday, Texas freshman Shane Buechele scrambled from some pressure applied by the media.

While speaking at his weekly availability, Buechele made a reference to Texas’ annual showdown with Oklahoma as the “OU-Texas” game. The quarterback was then asked why he didn’t call it the “Texas-OU” game.

Texas fans should probably excuse Buechele for his phrasing, because he was raised in a home full of Sooner fans. Three of Buechele’s siblings attended Oklahoma, and his other brother was also a fan of the Sooners. Buechele conceded that not even his status as the starting quarterback at the University of Texas will get his two sisters to be seen in orange this weekend. (Shane expects that Amber and Jordan Buechele will be wearing a more-neutral white, although Amber told the Dallas Morning News that she did order a jersey that is half-Oklahoma, half-Texas).

Buechele has thrown for 959 yards and eight touchdowns this season, and 65.6 percent of his 119 passes have been completed. Buechele’s fifth career start will come against an Oklahoma team that is ranked 20th in the Associated Press’ poll.

How have other Longhorn quarterbacks performed in their first starts against the Sooners? Texas has gone 3-7 in the last 10 games that have featured a quarterback making his first start against Oklahoma:

Simms and the Longhorns were beaten 14-3 by Oklahoma on Oct. 6, 2001. Simms completed 24 of his 42 attempts, and he threw for 198 yards. He was intercepted four times, the third of which led to Oklahoma’s game-sealing touchdown.

Mock and the Longhorns were beaten 65-13 by Oklahoma on Oct. 11, 2013. Vince Young compiled the better stats in this blowout loss, but Mock was given the start. Mock completed four of his nine pass attempts, and he threw for 21 yards and an interception.

Gilbert and the Longhorns were beaten 28-20 by Oklahoma on Oct. 2, 2010. Gilbert completed 27 of his 41 attempts, and he did not throw a touchdown pass. He was intercepted once.

McCoy and the Longhorns were beaten 55-17 by Oklahoma on Oct. 8, 2011. Even though David Ash threw more passes in this game, McCoy was the team’s starter. He did not throw for a touchdown, but he completed nine of his 16 attempts for 116 yards.

Ash and the Longhorns were beaten 63-21 by Oklahoma on Oct, 13, 2012. Case McCoy threw Texas’ two touchdown passes, but Ash earned the start this year. Ash completed 13 of his 29 attempts, and he threw for 113 yards. Ash was intercepted twice.

Swoopes and the Longhorns were beaten 31-26 by Oklahoma on Oct. 11, 2014. Swoopes completed 27 of his 44 attempts, and he threw for 334 yards and two touchdowns. Swoopes was intercepted once, but he also rushed for 50 yards and a score.