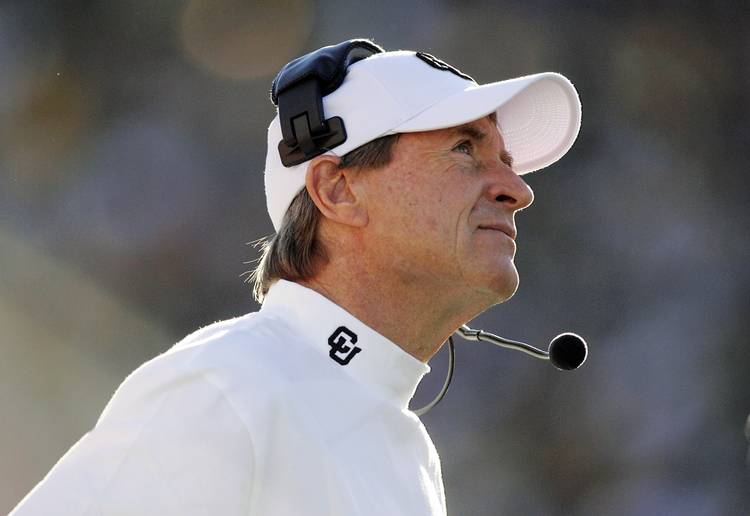 Head coach Gary Barnett of the Colorado Buffaloes looks up at the clock during a loss to the Nebraska Cornhuskers on November 25, 2005 at Folsom Field in Boulder, Colorado. Nebraska upset Colorado 30-3. (Photo by Brian Bahr/Getty Images)

Speaking on WHB-AM, Barnett blasted Strong and accused him of being unprepared and said he didn’t even want the job in the first place.

“It’s like a big soap opera down there,” Barnett said. “No, I don’t think he’s going to survive it.

Barnett was the head coach at Colorado in 2005 when the Longhorns crushed the Buffaloes 70-3 and advanced to the Rose Bowl.

“You think about how many coaches those kids have gone through, coordinators, it’s unbelievable. You just can’t get any continuity,” Barnett continued. “That’s been the tale of Charlie’s tenure down there. It’s just been change coaches right and left. Well, you have to change that many coaches, there’s something wrong. And it’s wrong at the top.”

Strong demoted defensive coordinator Vance Bedford last Sunday. Bedford becomes the eighth assistant that Strong has demoted, fired or left since the start of the 2014 season. Only linebackers coach Brian Jean-Mary maintains the duties he held upon his initial hiring.

Strong is 13-16 in two-plus seasons with the Longhorns. Under his guidance, Texas has lost 10 games by 18 points or more. This season, Texas is 2-2 heading into Saturday’s game against No. 20 Oklahoma.

“Do I think Charlie survives this? No, and I don’t think he deserves to survive this,” Barnett said. “When you can’t make any better decisions and stick with people any moreso than he’s done, then you deserve to go sit down and take a timeout and get everything together and go visit some people and see how they make decisions and do that.

“He needs a timeout and a little time off to go relearn how to be a head coach, because he’s just made this a disaster down there.”

As for the Texas job itself, Barnett claimed that Strong didn’t want to leave Louisville for Austin. In 2014, Strong told reporters the Texas job is one you simply cannot turn down.

“He didn’t want to take that job in the first place,” Barnett said. “Lou Holtz talked him into taking it. Charlie wanted to go to Florida or South Carolina. They both came open after he left. So, he didn’t want to be there. He doesn’t like recruiting. He’s disorganized. He’s all those things. It isn’t so much who’s the right guy for the job; it’s just that Charlie isn’t the right guy.”

Texas vs. OU: See who can pull a Southwest Airlines plane 50 yards the fastest