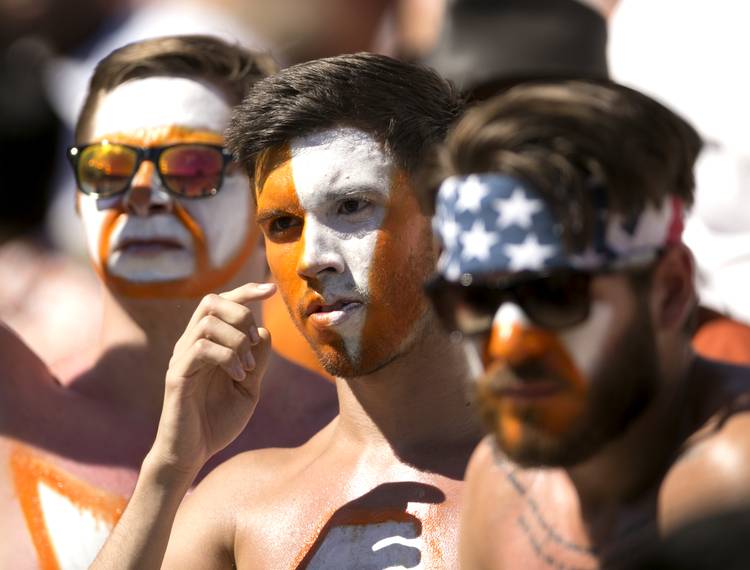 UT fans watch the Texas OU game in the second half at the Cotton Bowl in Dallas Saturday October 8, 2016. JAY JANNER / AMERICAN-STATESMAN

Texas lost 45-40 to Oklahoma on Saturday at the Red River Showdown in Dallas.

The Longhorns gave up 672 offensive yards to the Sooners, despite causing four turnovers in the game. Here’s how fans reacted to the loss on social media:

I'M NOT HAPPY with MY TEXAS #Longhorns performance this season!! OUR guys with the talent we have should be BETTER? #WTF @Strong_TexasFB

Charlie Strong took over the defense and then gave up 200 yards rushing to one player and 200 yards receiving to another. pic.twitter.com/hCCjyqwU2S

Strong takes over UT defense.
1st game: give up 672 to OU, most yards Texas has ever allowed. Checks Charlie's seat. Still hot. 🔥#HookEm 🤘🏼

I really can't wrap my football brain around how bad the Texas defense has performed with so much raw talent. Truly mind boggling.

Longhorns losing to Oklahoma. Come on Texas pull it together. Fix that defense. pic.twitter.com/vAK7WBKQkG

The only thing certain for Texas is Shane Buechele. He's the future

Texas vs. Oklahoma: Horns up, Horns down, and our plays of the game